The Most Shamefully Cliché Holiday Photos of the 21st Century 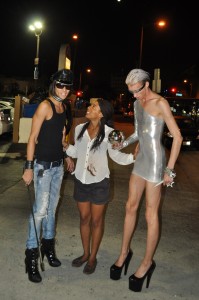 Me breaking crime against photography #4: Taking photos with locals. (But they were exceptionally fascinating!)

We’ve all been a victim (or perpetrator) of crimes against photography. What is it that makes people lose all sense of tact and originality when a camera is taken abroad? After drawing my own conclusions, I believe our verisimilitude in holiday photography lies in the desire for our trip to be validated. Think of travel as a pilgrimage and when you reach your destination, only then can you strike a pose to cement your arrival. DISCLAIMER: The comments in this post are not directed at any of the individuals pictured below, but the merely act as a conduit for example and expression.

Every Londoner knows NEVER to step into one, for they stink of piss, are showered in spit and plastered with dubious business cards. Even if judgement day came and fire were raining from the sky, a real Londoner would still think twice before going into a telephone box for shelter. But tourists just loooove to take that I-just-stepped-out-the-box photo. I hope you were vaccinated.

Being Happy at the Taj Mahal

Now, this is just the old lady talking in me. Although the Taj Mahal is one of the most precious examples of Mughal architecture and pulls millions of people a year to its gates, at the end of the day The Taj Mahal is still a mausoleum. I don’t mean to be a spoil sport, but I find there’s simply too much smiling at the site of a man’s grief after losing his beloved wife. And considering that the second most popular tag is #TajMahalPalace (and trust me, these instagramers aren’t stay at the 5 Star hotel of the same name), shows me that they’ve completely missed the point.

The Pyramids of Giza

Many a monument has been subjected to being squished, held or touched by the hands of holidaymakers but don’t you find that by doing so is a physical act of belittling an entire culture and history for your voyeuristic entertainment?….Too far-fetched an argument? Either way, it annoys the hell out of me and demonstrates you’ve only recently conquered the art of perspective photography.

Posing With The Locals

It was a difficult one to sift through as some instagramers were originally outsiders but then became part of the community (yes, I’m a massive stalker). Then there are others who were just pulling people off the street. Being pictured with the local inhabitants of the country you’re visiting has always taken pride of place for people who want to look involved in where they are staying. Many street sellers and market holders have been caught in the eye of a flash and immortalised as someone’s pal for years. I’m sure they wish nothing more than to be stored forever in the digital memory banks of a stranger’s camera. We don’t see people coming over and taking selfies with the staff at McDonald’s now, do we?

The Leaning Tower of Pisa

Unfortunately, I quite like this one. It’s a curiously odd building and you can’t help but laugh when watching someone feign to hold up a 12th century building. The only qualms I have is when they put NO discernible effort into it. *cough*secondpicturedown*cough*

Do As The Buddha Does

Perhaps in the midst of such an illustrious icon, some travellers lose the function of their legs? No doubt there are people who prostrate, kneel and sit genuinely to be closer to Buddha – but I find those that do so are usually turned towards him, not the camera. Perhaps between all the drinking and dancing they found the time to invest in a more spiritual side.

I’ve left the worst perpetrator for last! If you know anything about me (or read my post on Paris), you’d know the French capital is not my favourite place. Amidst all the swooning, baguettes and bloody boat rides, seeing fingers curled into the shape of a heart simply adds the last drop to my already overflowing sick bag.

Are there any other crimes against photography you think I’ve missed? Perhaps you’re a firm believer in cliché shots? Get in touch below and let us know! Follow me on Google+, Bloglovin or Instagram!