The Best Places To Chill Out In Bilbao

Bilbao is the capital of Bizkaia and, in my mind, one of the fast developing autonomías in the Basque country. The farming background, rustic walks, and picturesque farm houses disappear as soon as you enter the city proper. Since moving to the Basque Country, I noticed how Bilbao and San Sebástian pitted themselves as friendly rivals. From avant-garde to traditional, Real Sociedad vs Athletic de Bilbao, beach life vs cityscape. This blog post covers my favourite free haunts and shows off Bilbao’s artistic bone. 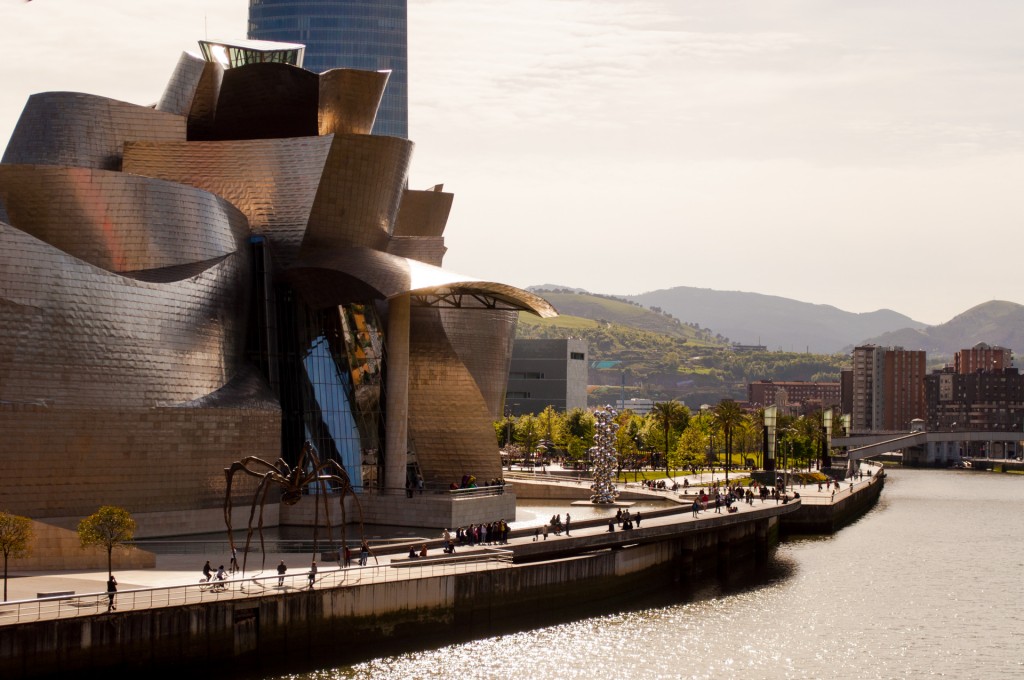 Bilbao is the largest city in the Basque region and being an hour away from San Sebástian, I frequently found myself drawn to the city. The Guggenheim museum needs no introduction. Its contemporary design speaks well for the exhibitions that it holds inside. Since the Guggenheim was planted in 1997, it has grown into a cultural succubus – placing Bilbao on the map as the art capital of Spain. However, it’s not a place that I feel needs revisiting, especially at €13 a pop. What makes it an attraction is the architecture outside, and all that is free! Instead, I have chosen La Alhóndiga as my cultural attraction. This multi-purpose arts centre hosts a library (hence free WIFI!), sports facilities, cinema and restaurants. But don’t worry, it’s not styled in the same way as those block convention centres you in your local area. In its basement, there is a free gallery which (personally) has the most avant-garde and thought provoking exhibitions. Just outside the Alhóndiga, on Plaza Arriquibar, is what I can only call a surrealist roundabout. It seems like back in 2010 this plaza was remodelled  on one of Dali’s tamer dreams. Lamps, mosaics, mirrors, vegetation, doors, windows and a chessboard table – it was all very…beautifully odd. 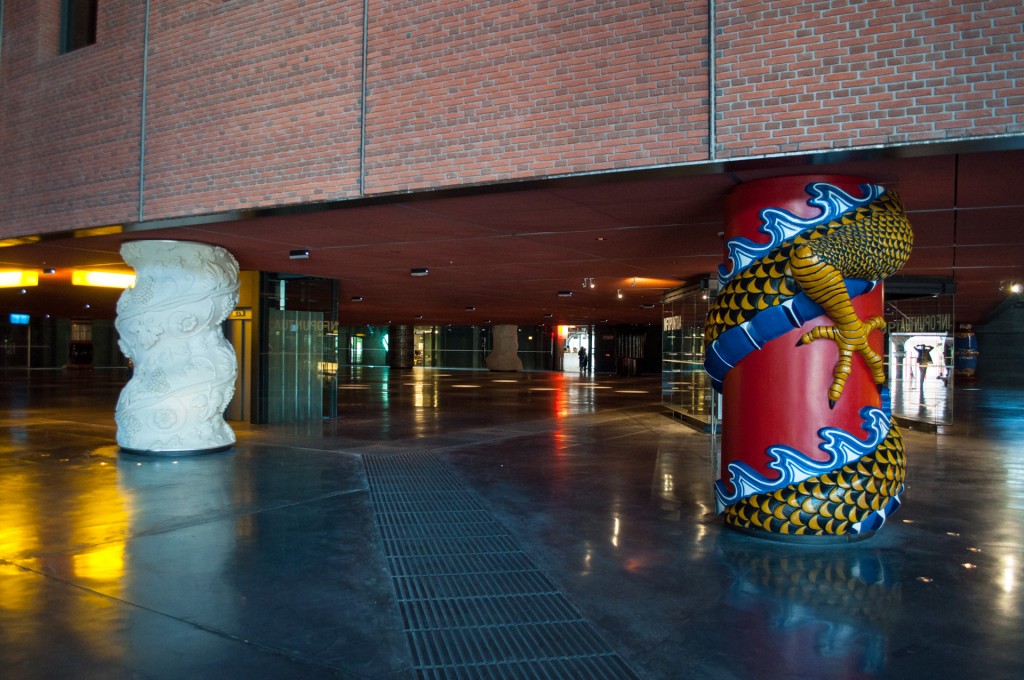 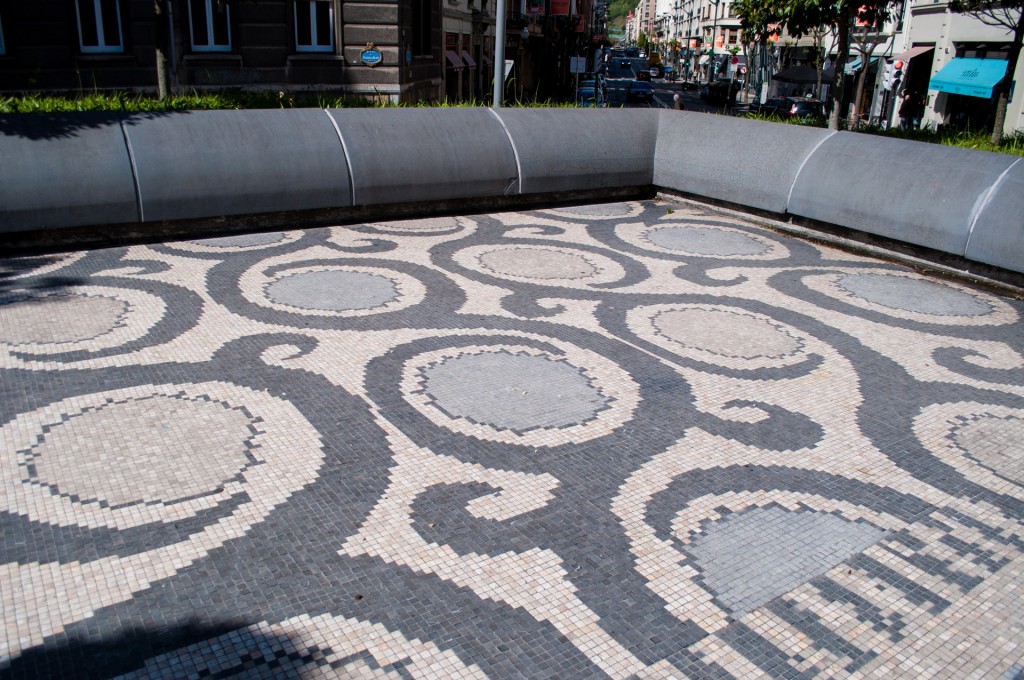 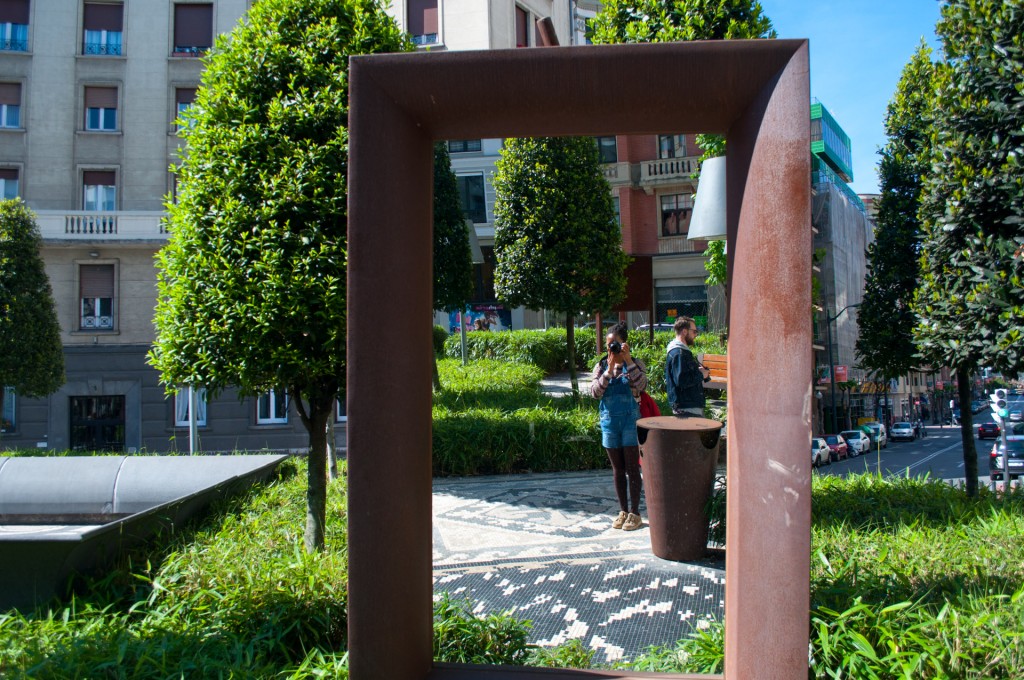 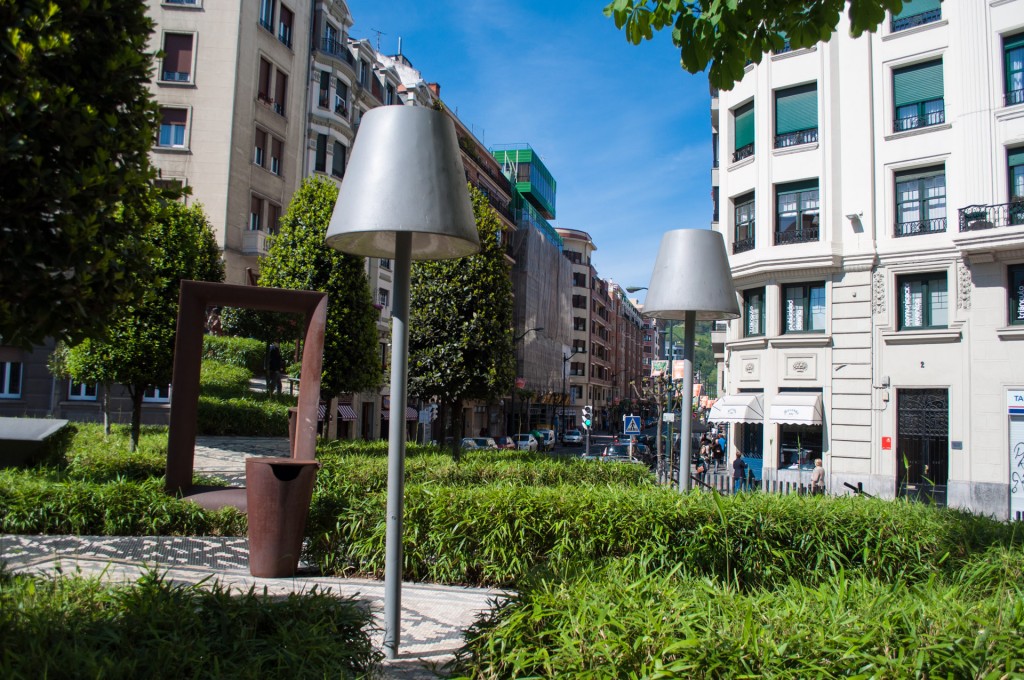 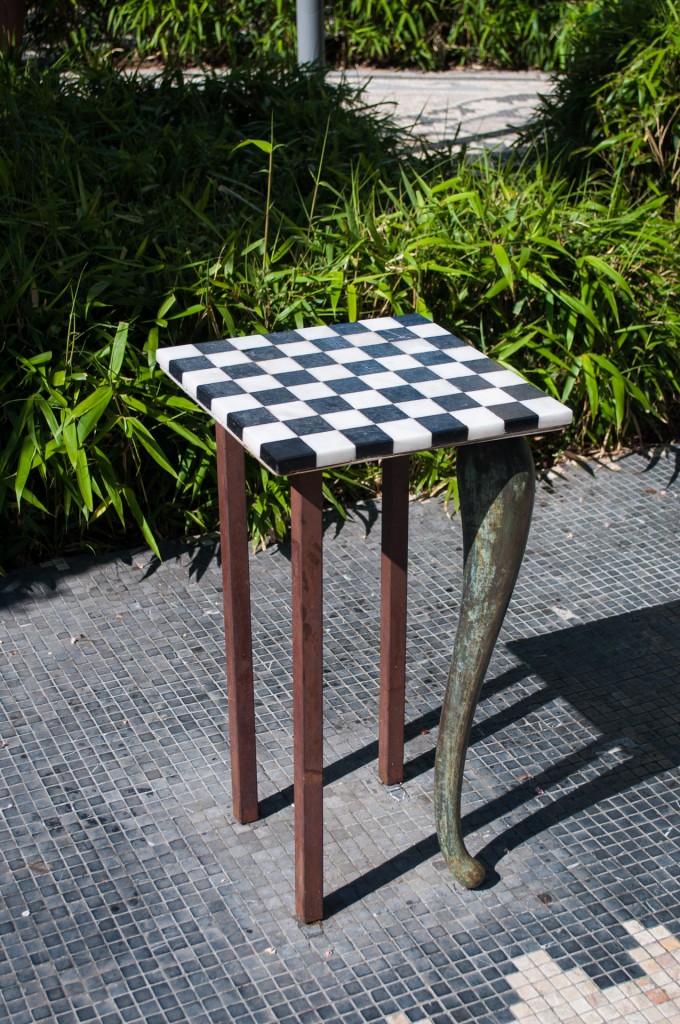 The architecture in this city is relentless I found myself walking about and saying, “Wow! What is that?” So I’d run across the road (well. Not without hesitations and a few false starts – there’s a lot of traffic), try and find out what cultural heritage building, or gallery it was to only look at a sign a realise it was a lawyer’s office, or accountant’s. Should the mundane nature of the inside effect your view of the outside? It shouldn’t, but it does. How would you feel about the Eiffel Tower if it were just a telecoms structure? Or if The Kremlin was actually a massive casino? I soon stopped trying to figure out what the functions of places were and just appreciated their character. 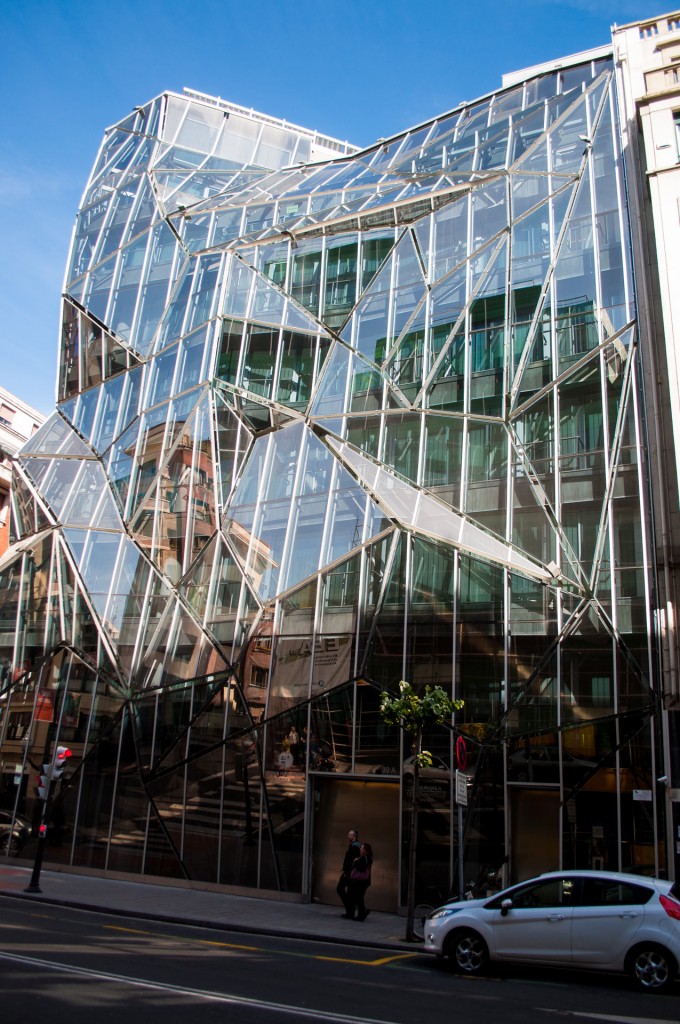 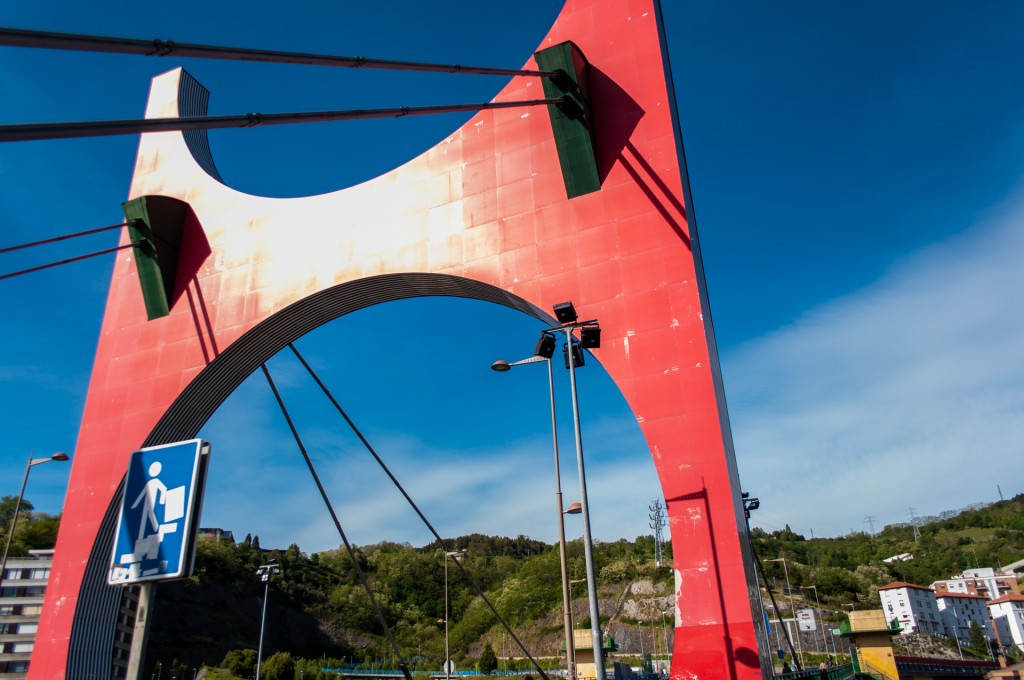 The Red Arch connects the city to the suburbs at the Guggenheim. 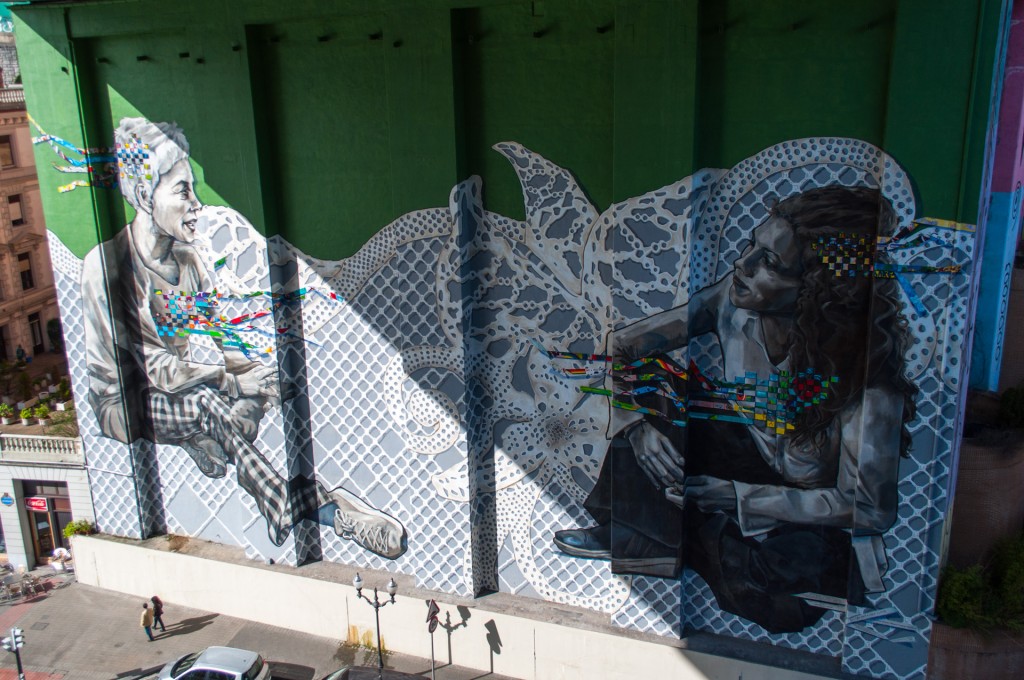 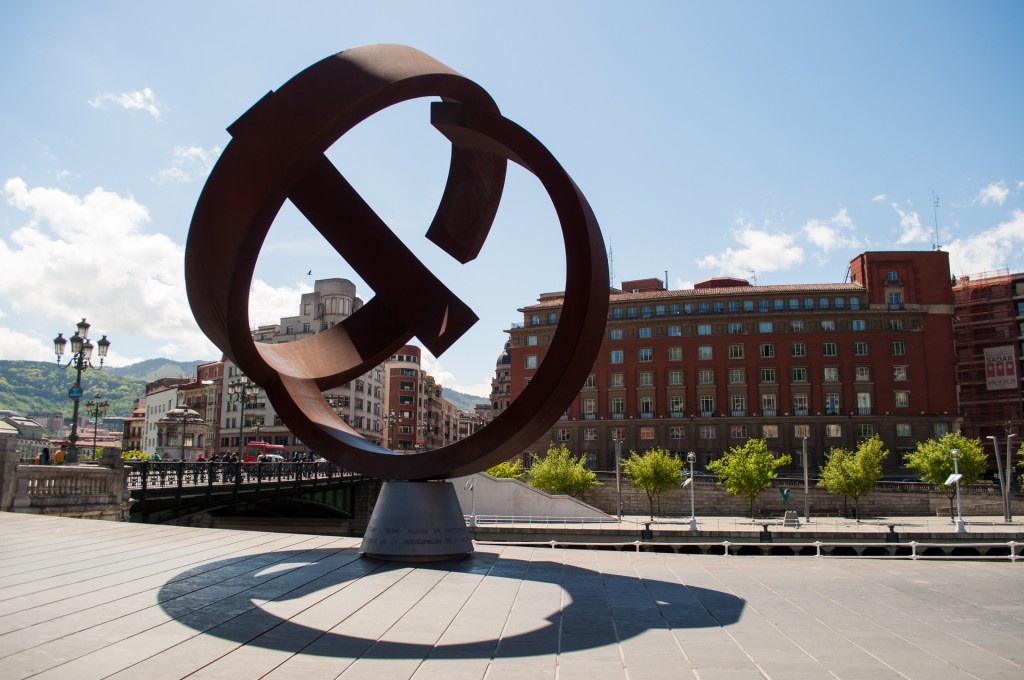 The 20th century saw change throughout Europe and the Basque Region was not about to be left out. Puente Vizcaya (Biscay Bridge) was the proudest feat during the industrial revolution. Railways, ships, skyscrapers – this was a time when steel was as valuable as gold. What makes this bridge edgier than others is that it ferries both vehicles and pedestrians across the mouth of River Nervión without interrupting the passage of boats. But if travelling horizontally isn’t thrillseekerish enough for you, the bridge is open for bungee jumpers on specific days throughout the year. For €100 you could be plummeting, head-first, squished between the Atlantic and the city. Reservations have to be made in advance so check out the upcoming dates here. 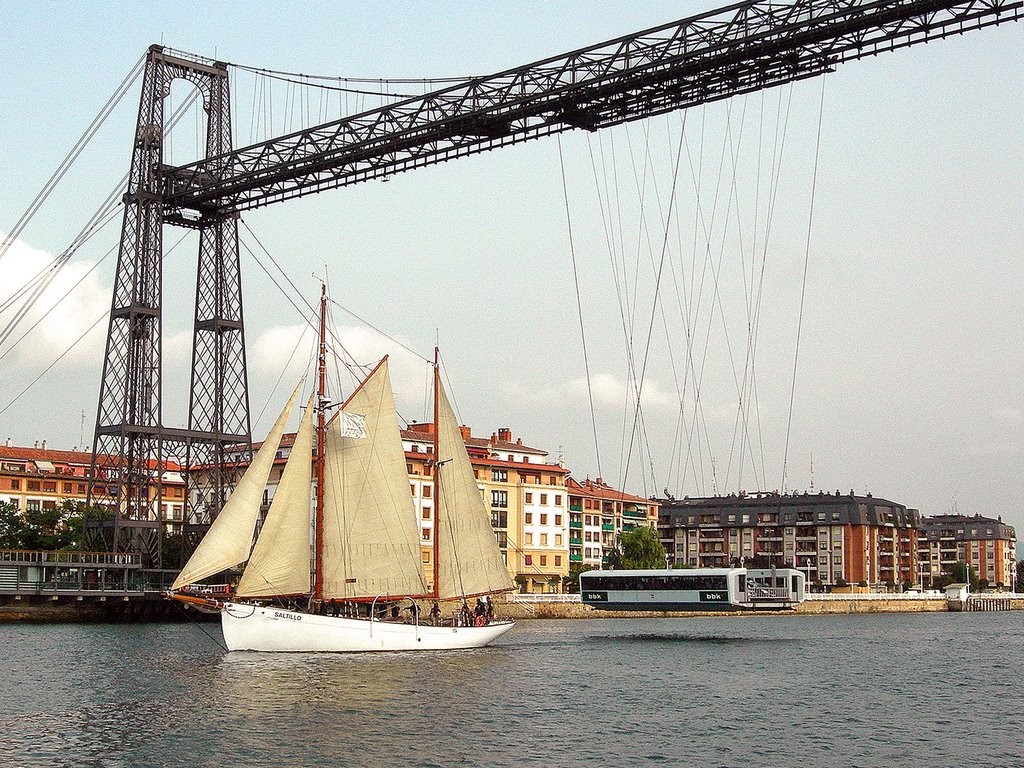 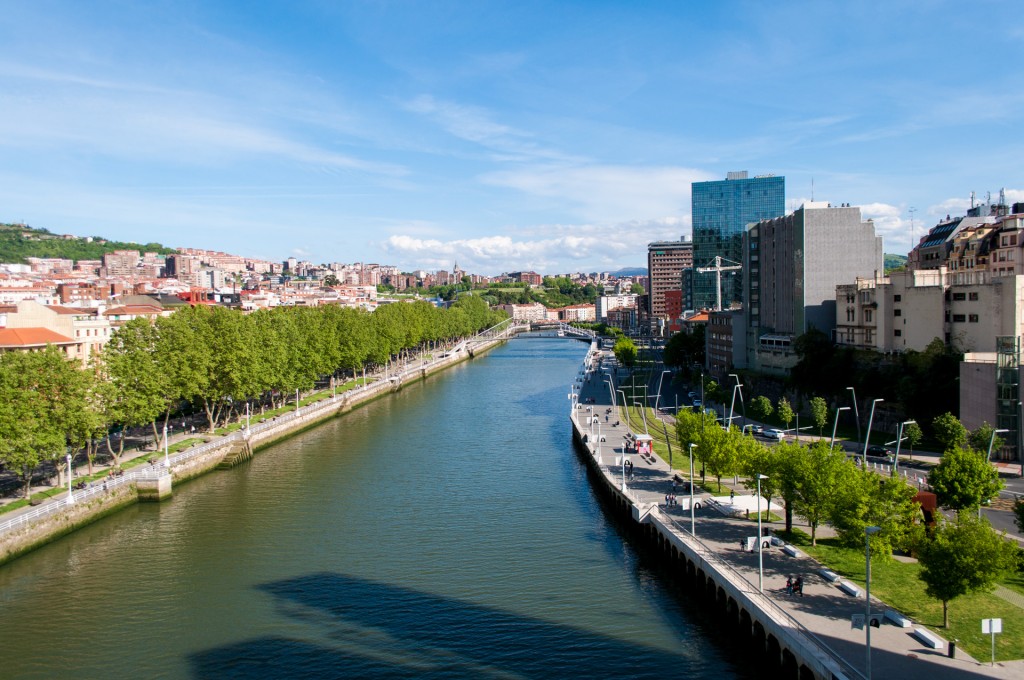 If you prefer views from a more stationary location, then for you can take the Funicular de Artxanda to get beautiful views of the metropolitan area and surrounding greenery. At 8 metres tall and weighing almost 8000 kilograms is “The Fingerprint”. A sculpture created to commemorate the 40,000 Basque soldiers who died fighting for freedom from Franco, and for the freedom of the Basque country during the Civil War. I don’t think there’s a more beautiful location to have put it – when you see this sculpture, you also see the beauty of the Basque region that they gave their lives to hold on to. 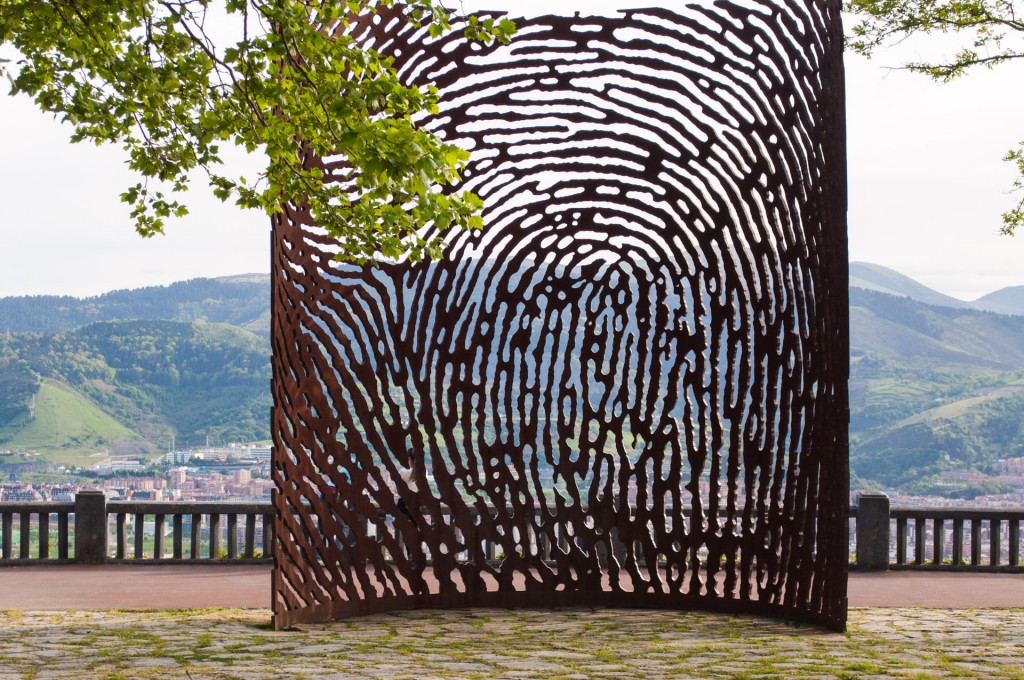 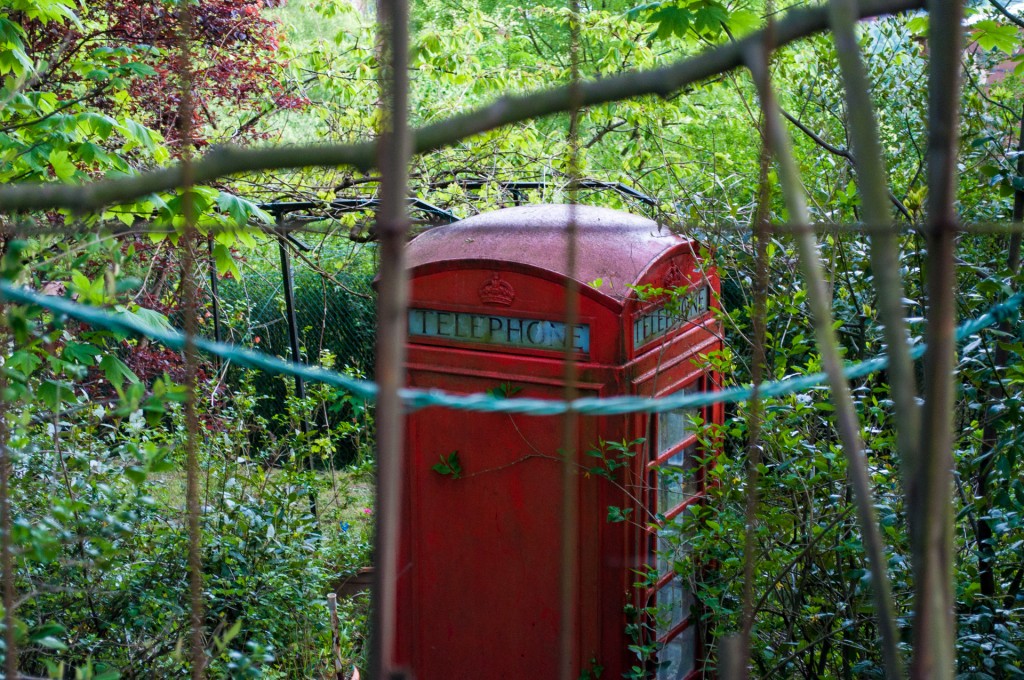 Does something seem out of place to you?

There is an ongoing kaleidoscope of activities and points of interest, but in the evenings you can either find me in a bar – or in the warmer months at Parque de Doña Casilda – planned in the 1920s in the English Garden style. 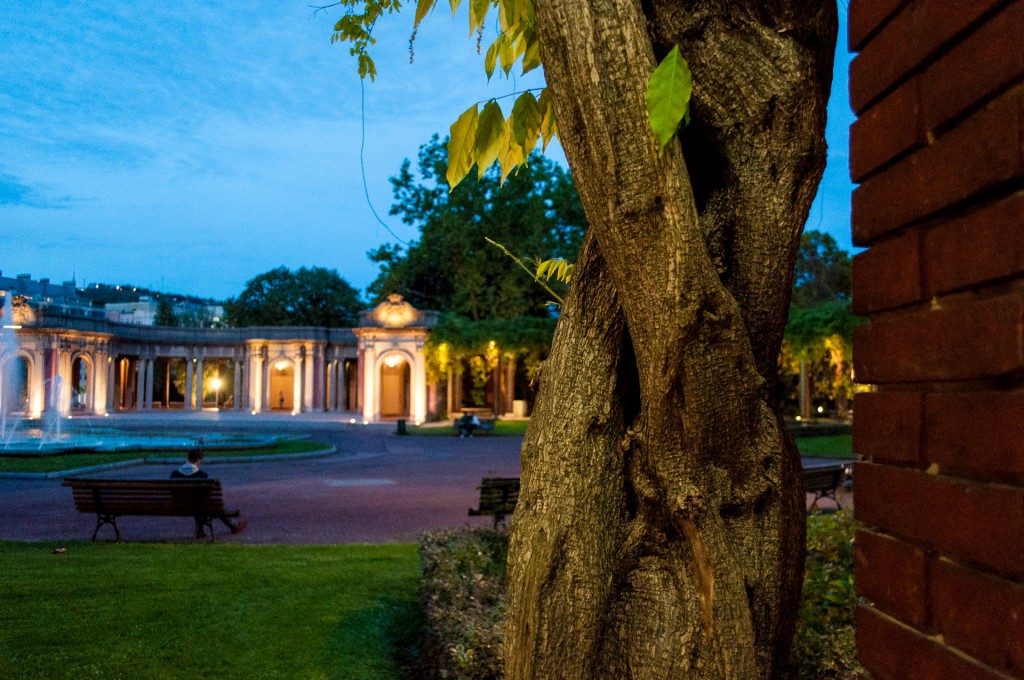 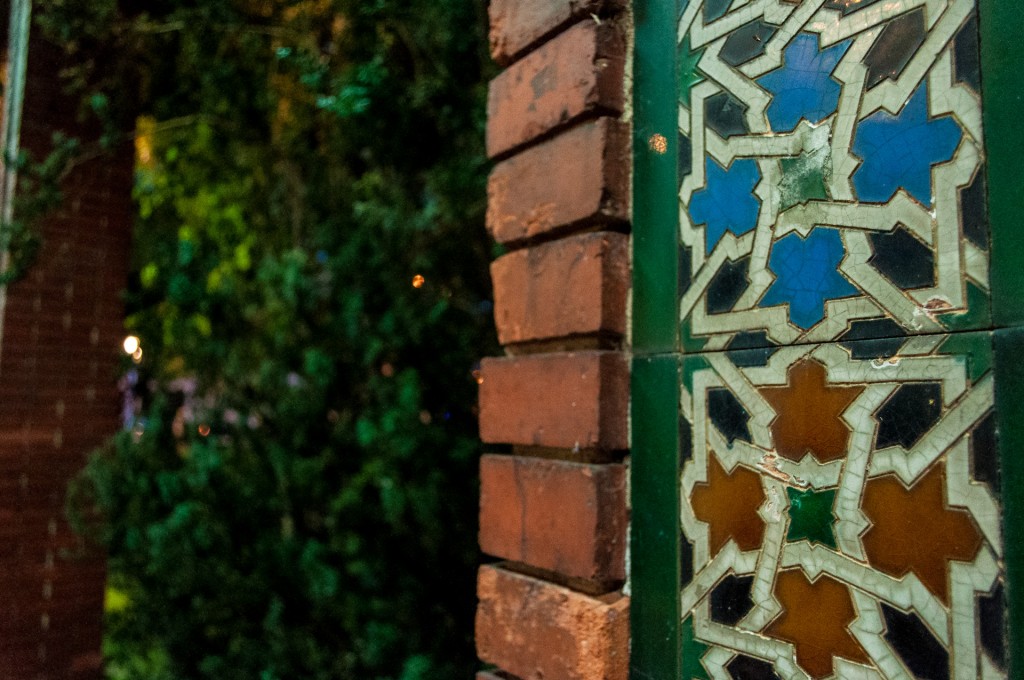 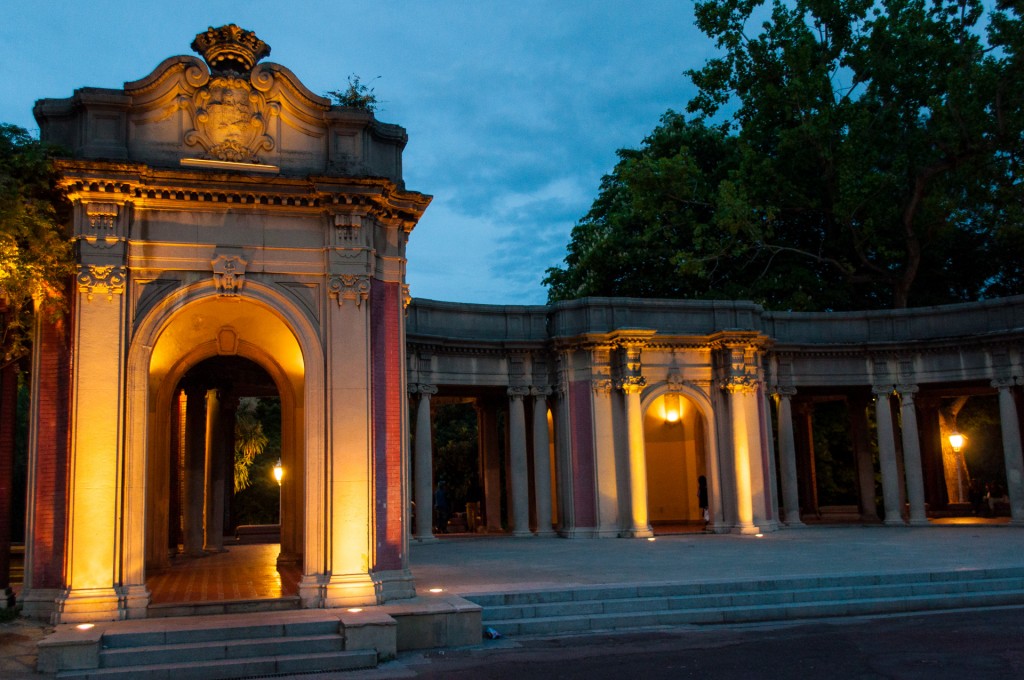 Bilbao still manages to maintain that big city feel, even with a population of only 400,000 and the mountains in close sight. Spend a week or spend a night, there’s plenty to see and do inside and outside of the city. In the Basque country, Bilbao is only the beginning!