Woo hoo! My first summer festival since….I can’t even remember when. Lovebox has been on everyone’s list for the past 5 years. With the skater boys to the Chelsea gals etching this two-day city festival into their calendars. As my companion said, inner-city festivals are brilliant because “you get to do the festival thing without doing the festival thing”. Eat expensive food, get covered in mud, get drunk, dance your arse off and then you can do it all over again the following day being both clean and refreshed. From looking around I would say the majority of the punters were from in and around the London area, giving them an opportunity to let go and wig out in the safety of their own back yard. So, what was so special about this year’s instalment? For a festival that started out as a Dance club night at 93 Feet East (my second home), its incarnation has changed and grown over the past 12 years, leading to 2014’s Hip-Hop and ’90s inspired line-up.

The decade that bowed out disgracefully from the 20th century has now made a surprising come-back, and although half of Lovebox’s demographic struggle to see the connection between a pencil and a cassette tape, the sound of the festival was either classic for some or nostalgic for others. The weekend consisted of modern favourites such as A$AP Rocky, MIA, Maverick Sabre and Chase and Status (jeez, they’re at every festival), whilst also having an adventurous addition of classic artists like Nas, Soul II Soul and Madlib. A$AP was who I went to see on Friday and he delivered an all-round solid afternoon performance. Although visibly peeved that the crowd weren’t hyped at the start of his set, Mr “Pretty Mother Fucka” gradually received the reception that proved he had a loyal fan base in the UK. With single smashes, ‘Wild For The Night’, ‘Goldie’ and ‘Fuckin’ Problems’ A$AP held the crowd in the palm of his hands as he got them chanting his name, scrambling over his discarded water bottle and howling oh so meaningful lines like, “They say money make a nigga act nigga-ish, at least a nigga nigga rich.” 25 year old A$AP even received an A3-sized, hand drawn portrait of himself from a fan in the crowd. It was nice to see him look genuinely surprised and impressed. I can’t say that I completely enjoyed his set as I don’t know much of his tracks, and upon going on YouTube the next day to listen to his ‘Long.Live.A$AP.’ album, I can’t say that the sentiment has changed.

Katy B, as phenomenal as always, has never had a problem holding her own but this year she was joined by some curly-haired backing dancers, with Katy even shimmying some synchronised moves. The ‘Lights On’ singer performed favourites from the On A Mission album, alongside a couple tracks from her latest release, ‘Little Red’. After having seen her live twice and interviewing her, Katy B is as enigmatic on stage as she is in person. The crowd truly feeds off her energy, which filtered through her club remix of Baby D’s, “Let Me Be Your Fantasy”. Music is her life blood as she explains its importance by explaining how “dance music connects people with the same feeling at the same time”…now that’s just poetic. 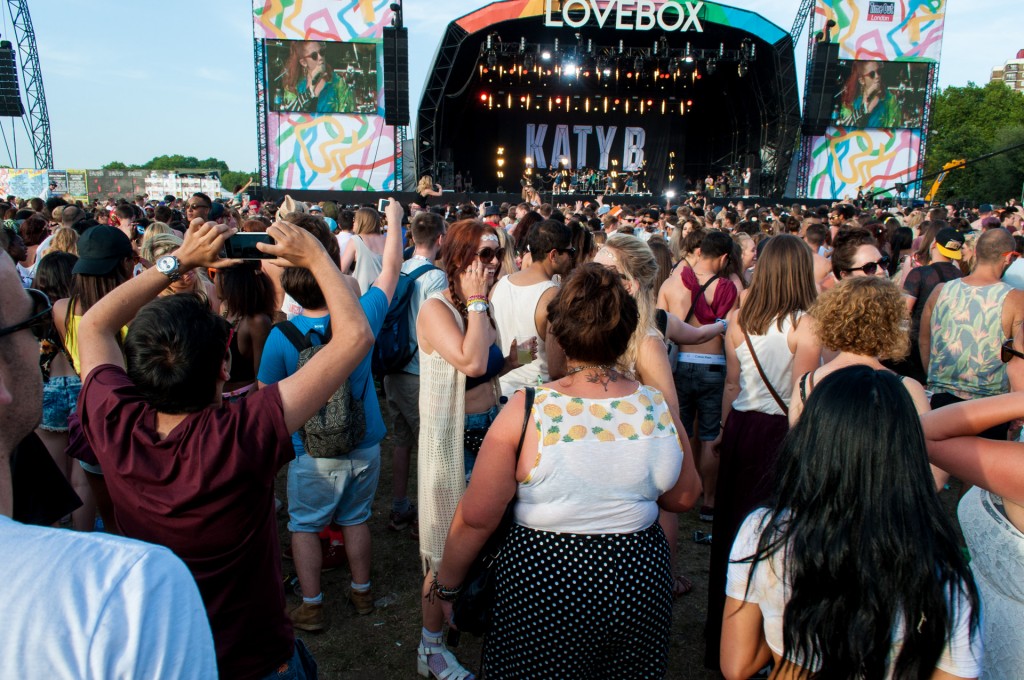 Aided by sweltering temperatures, this was one of the best-looking congregations of 18 – 35 year olds anywhere in the country, as Victoria Park was besieged with sun-kissed tans, toned abdominals and bikini tops. The standard summer festival fashion applied, but glitter was replaced with sequins, daisy chains for rose head bands and messy up-dos for French plaits. But the ‘90s prevailed with half the girls looking like TV extras from Buffy; wearing slip dresses, chokers, over-sized jackets and black, rubber platform sandals (you know which ones). Lovebox is open to anyone but it particularly gives Londoners the opportunity to show our best side: You have a good side, I hear you ask? The fun, conversation-starter who’s the last to leave the party, plays the fool and doesn’t mind sharing a cigarette with a stranger. Victoria Park is the zoo enclosure and for one weekend we get to roam around free! 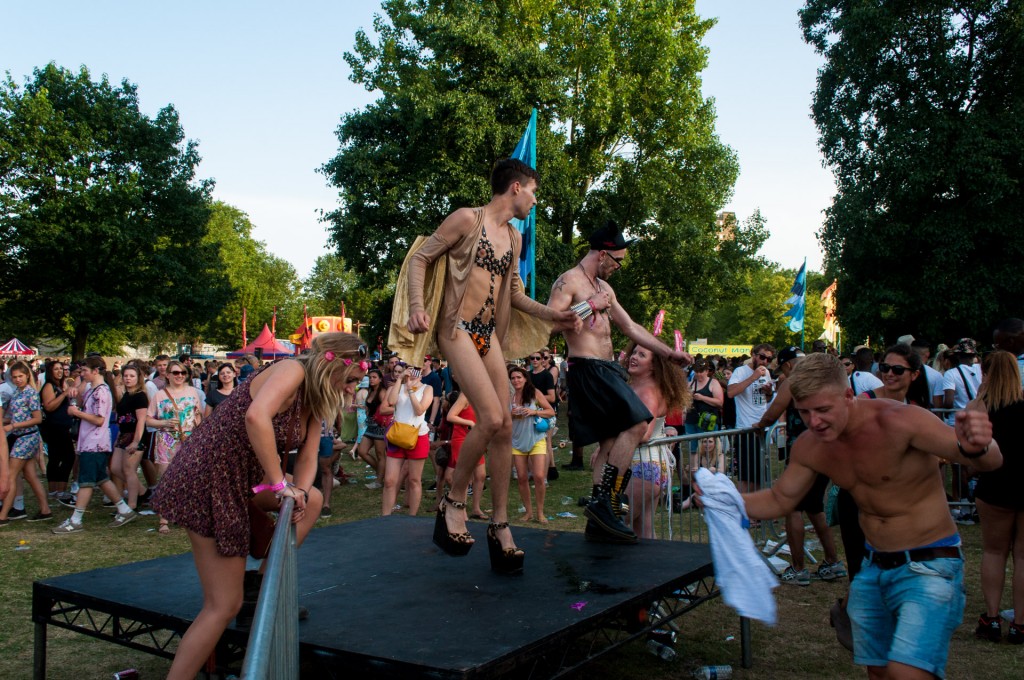 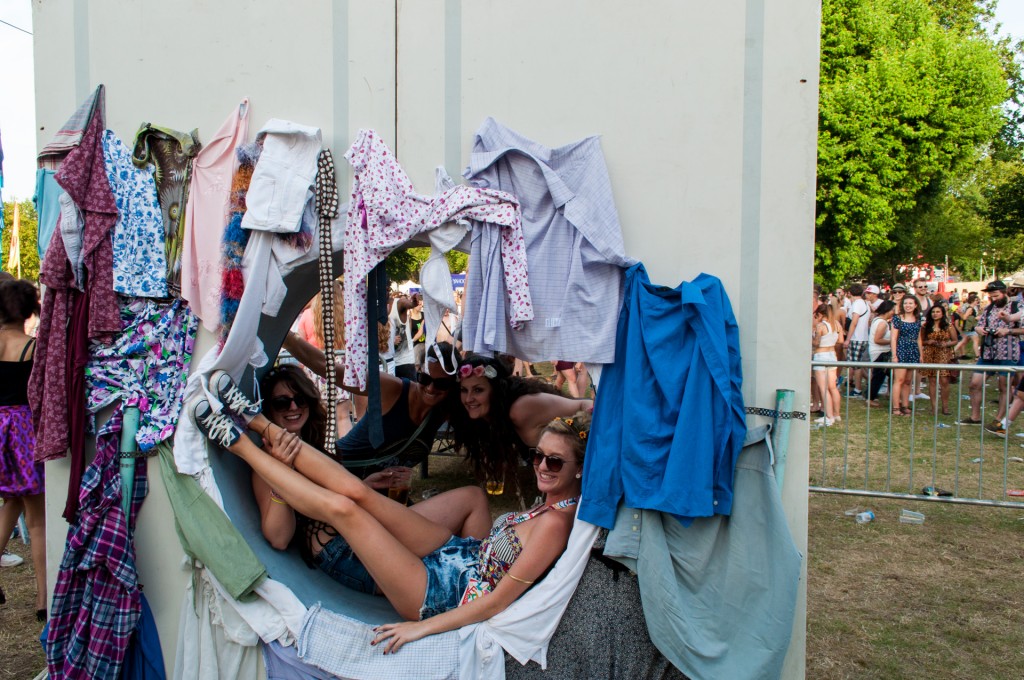 Although the sun was heading off to bed, the temperature held steadfast which meant some of the open stages began to liven up. A personal favourite being the Dance Off stage which had a real boxing ring for the public to bogey, head bop, booty shake or whatnot in. DISTRIKT even had the festival organisers excited as this Burning Man desert camp played in the UK for the first time – EVER! Above the black hall were extraordinary DJs, split between the UK and the West Coast, dishing out turbulent beats to make you say “oooooh.” The Aperol Spritz Social played host to everyone’s favourite terrace party. With 1 part Aperol, 1 Part Prosecco, a dash of soda and a sexy wedge of Orange this summertime Italian classic had everyone chilling out and grooving to the likes of Craig Charles’ funk and soul tunes.

Friday night had two electro heavy weights going head to head. Chase and Status pulled in the bigger crowd on the Main Stage with their cross-genre, melodic upbeat rhythms, whilst Sub Focus completely stunned a smaller but more participatory audience with avant-garde, note twisting, baseline dropping hooks. Just like back alley sex, Sub Focus played fast, hard and dark and left his audience stumbling at the knees asking each other, “did that just really happen?” Then upon finding refuge in the Circus Bar tent, the likes of NWO and Ghostface were seeping from the speakers. With a drink in one hand and the obligatory disco ball overhead, night had fully descended but so had the rain, meaning festival goer numbers dropped by half. Friday was good, but looking at the eagerness on everyone’s faces to get home, it was clear they were preparing to fight another day. SATURDAY!

The next day was when the numbers really rose, and also had some incredible acts, such as JUCE, VV Brown and Noisey’s alternative stage with The Horrors, Crystal Fighters and Hercules & Love Affair. Although the festival was spread across a small corner of the park, there were many distractions to keep your walk from one stage to another entertaining. Fresh coconut water was the hit beverage of the day as temperatures hit high twenties. With masseuses, hammocks, roller skating, funfair rides and bungee jumping courtesy of Sure, there was a lot to spend your time (and money) on.

Nas was definitely the highlight of Saturday as he played through his seminal album, ‘Illmatic’. It was clear that he was the prophet to the congregation of the Main Stage church. The crowd sang through each track as if it were bible scripture. Groups of people strived to reach the front as if they were trying to receive healing. But beware folks, as followers of Nas-ism can get nasty, especially after I was abused from a couple hustlers for not “vibeing” enough to his flow. From pinky waving to straight out skanking, in my opinion, the dance moves in the crowd were anything but spectacular.

Bonobo was who I was looking forward to and I’m proud to say he had a crowd that extended beyond the perimeters of The Big Top and played a set that both hypnotised and entertained. The live brass section, flute and drums gave a well-needed punch to Black Sands tracks like ‘Kiara’ which fans would have been accustomed to. Bonobo provided a heady mix of accented house beats and electronic dance to then slow it all down with ‘Kong’, at which point a girl proudly commented, “I had my first shag to this song!” Let’s just say I can never listen to this record in the same way. 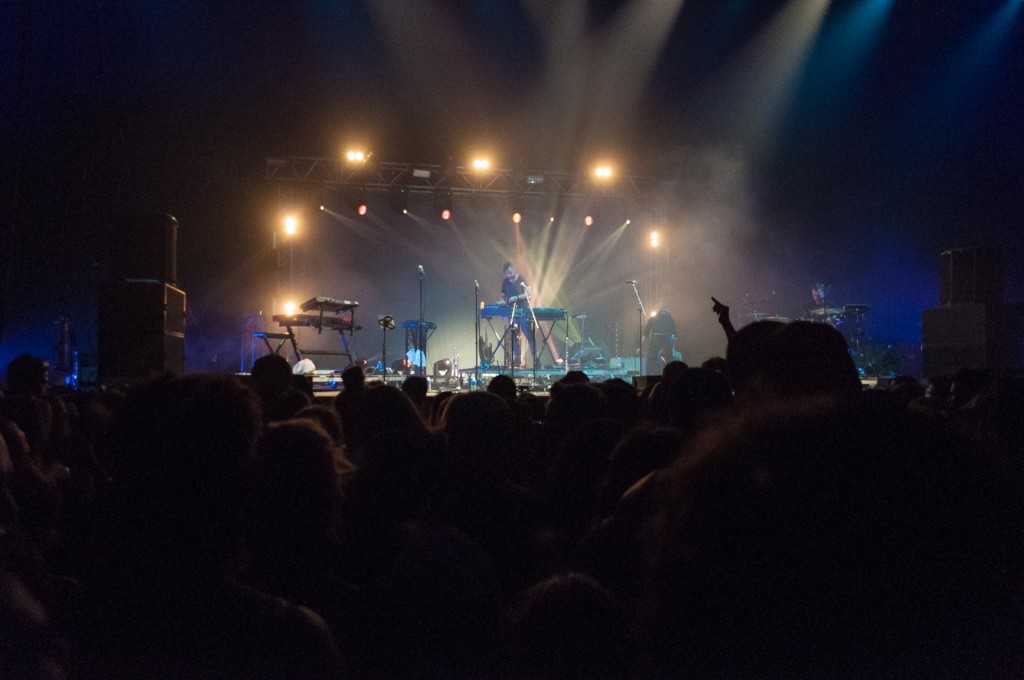 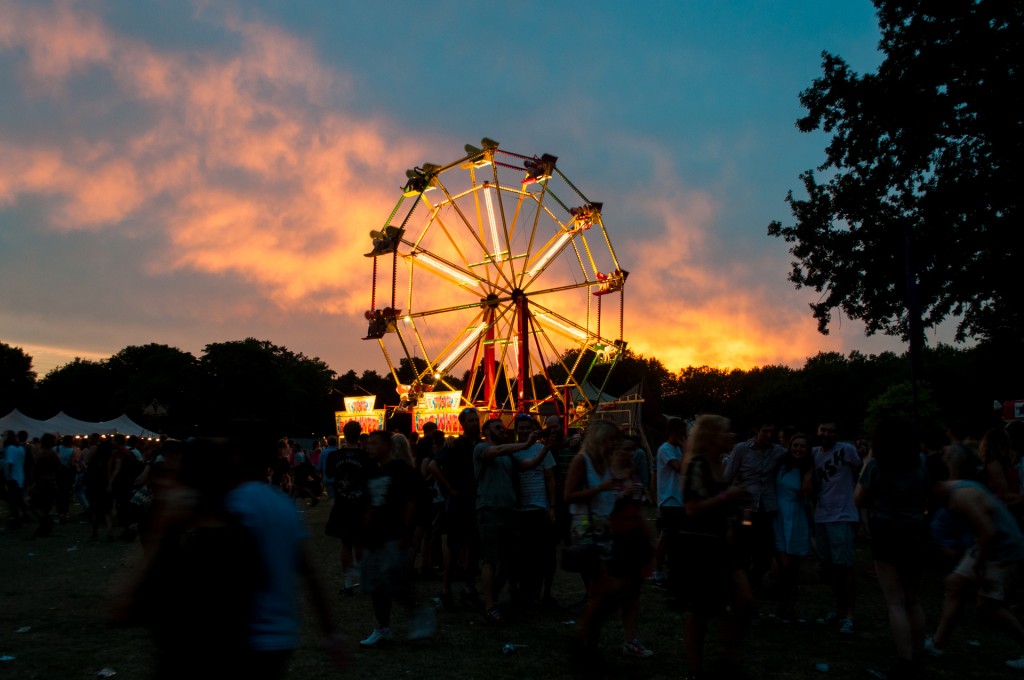 As sceptical as people are of the inner-city festival, Lovebox proves to be a successful experience. Nevertheless, the drawback of any metropolitan festival is the impossibility of acquiring a late night licence, because at 10pm when people were just coming up, the stages were coming down. But lo and behold, the official after party locations in the forms of The Village Underground, Autumn Street Studios and Oval Space saved many a reveller from aimless dancing and unspent energy. Apart from some equipment issues and sound problems (let’s not even talk about MIA’s set), Lovebox 2014 tastefully brought together classic and new in an undulating adventure of hip-hop, dance and a heavy pinch of London bravado.