Location: Lucas Crowther sitting at the airport on the way to Hamburg to play a gig for the night.

I like them all in different ways; they’re all exactly the same, like you can’t choose between your children.

Who wrote the songs?

Me and Joel wrote them together, on the previous two Joel wrote more of the words and I wrote the music and then from there you get into a rhythm and hash them out with the rest of the band

What was the inspiration behind ‘Freedom Run’

It’s our job, we had to put an album out eventually, you’ve got to get money. There wasn’t really any big inspiration. I didn’t listen to some mad album one day and was like “awh, I’ve gotta make some music!” It’s just an album about what’s going on around us, everyday life – reflecting on what’s happening. I’m all over the shop, like a traveller or a nomad, picking up books. 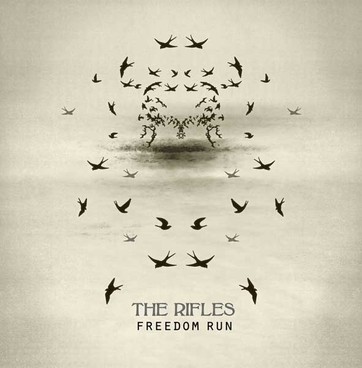 Did you notice that there was an obvious shift between your first album and your current one?

It’s really different, in a good way, ‘Freedom Run’ has just developed a lot more, our first sounded a bit stripped down, very A-B-C, now it’s developed a bit more, you gotta change it up, you can’t sit in one place, no one does that, you don’t sit around in the same clothes for 3 days [pause] like some guys in the band, they’ve been sitting in the same boxers for four days straight! [embarrassed and accusatory laughter in the background from the rest of the band]

LUCAS:  yea, that’s fine. I’ve got bored of talking about our album too

What past experiences have you had that will influence how you go on tour?

Never get on a tour bus. Especially one with thirty people, ever again. It was so bad and depressing. We did this Great Escape Tour and I didn’t like the bus or the people. There’s just no peace – and then you have to get up and go shower in a crappy venue with no hot water, no towels. Ah! I’m never going on a bus again; I’m just doing the hotels now as I personally like a bath or a shower in the mornings.

Where’s your favourite place in the U.K.?

Glasgow. The people are cool, there’s a good vibe, and also, I’ve got some family there too, like my Grandad. All the cities are good really. [laughs] I’m just going back to my ‘it’s all good’ answers aren’t I? But you know what I mean, It’s all good but it’s all a bit mish-mash really. It’s the UK.

What are you listening to at the moment?

Was just listening to Kasabian’s latest album actually, it’s really good. Also I’m listening to Noah and the Whale, old music as well obviously, Bob Marley, everything.  I’m crazy like that, like a chicken all over the shop. I listen to it all.

Nah, I don’t give a shit. It’s just a pain in the arse [matter of fact tone].

If I gave you £1 right now, what would you spend it on?

A double cheeseburger from McDonalds from the 99p meal. What about you?

Me: I’d buy a scratchcard.

What would you spend a million on?

I’d blow it. I’ll go somewhere and mash it up hard! And then I’d think about what to do with the money only when I’ve finished.

Me: If I had one million I’d go shopping and drink expensive champagne

LUCAS: I’ll join you for a drink in your world, but I hope you don’t mind when I pop back to mine to get some McDonald’s.

Check them out on www.therifles.net

Taken By Trees: Other Worlds