The Legend of Txindoki Mountain

For the past six months I have seen this mountain every day whilst travelling to work. It’s been a commanding presence on the landscape as Txindoki is visible from many towns in the Goierri and Tolosaldea region. It’s a stoney needle that juts out of the land and demands attention. At 1,346 metres tall it was still snow-capped in April even when the surrounding towns were blooming with flowers. I feel as if we have a shared bond, Txindoki guards me as I journey to work and I watch it. Now the ice has melted, the rain has alleviated and the sunny days have begun – the time has come to climb!

Unlike some other peaks, Txindoki (“chin-doh-ky”) is very easy to get to as a bus stop is in the town of Larraitz, where the mountain is situated. The best time to set off (and this goes for any hike really) is in the morning, so the burning midday sun isn’t sapping water and energy from you. After all, it is easier to warm up than cool down – especially when walking. 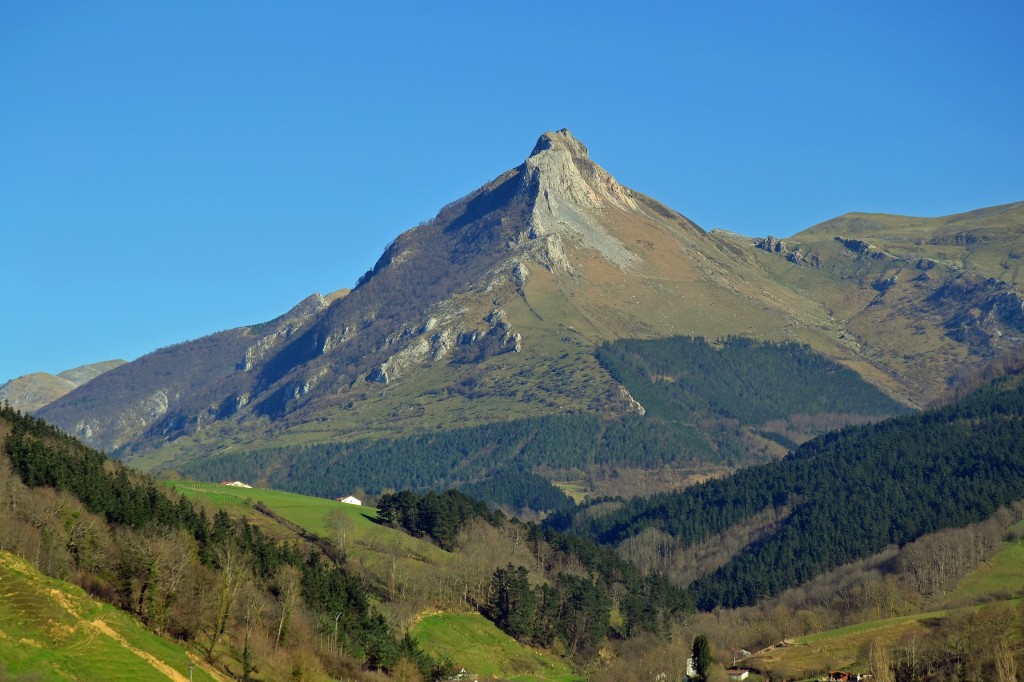 Txindoki in its full glory

There are multiple routes to the top but starting in Larraitz is the easiest. There will also be signposts to point you in the right direction. The route winds around the skirts of the mountain before making an ascent across the spine. However, there is a shortcut that shoots straight up to the peak. Only attempt this if you’re fit, and I’m not talking about  yeah-I-don’t-take-the-lift-I-use-the-stairs-fit. This route has its own name – Tximista Bidea, “The Lightening Path” in english and it’s incredibly steep. 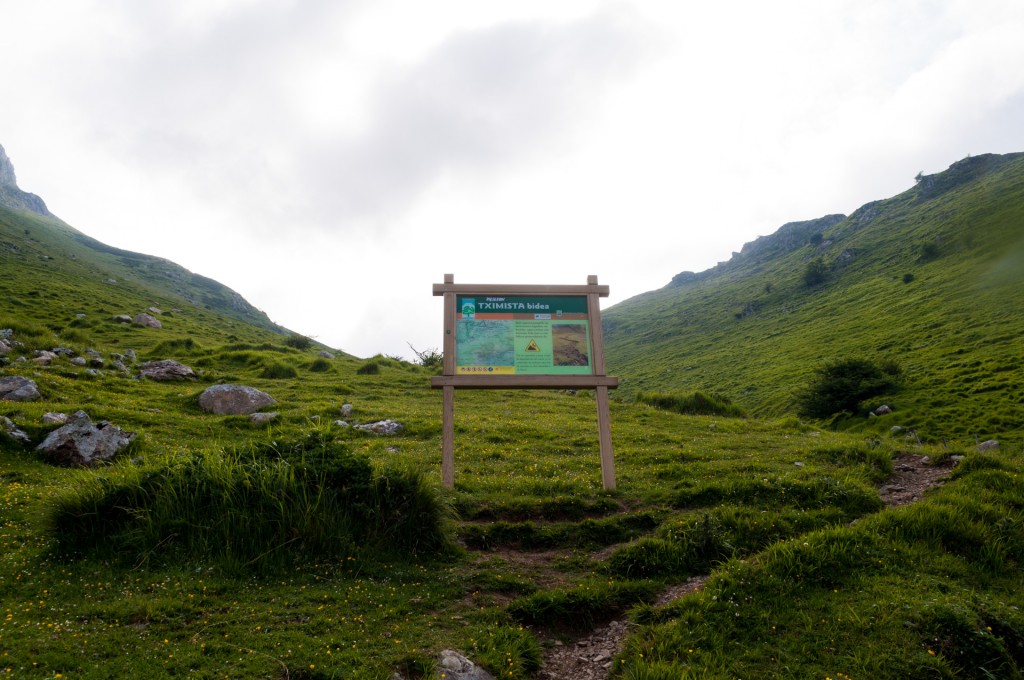 If you look to your right, another peak will be in view (below). This is the gaztelu (castle in English) where long ago, there stood a watchtower to survey the lands and approaching enemies. 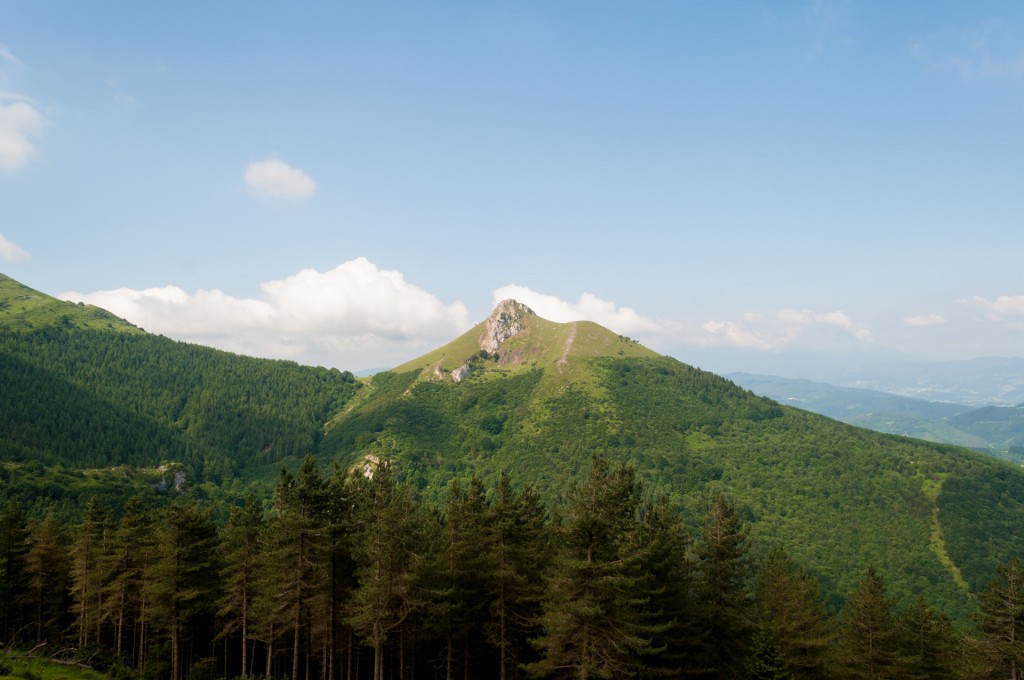 One of the diverging paths at the start of the climb leads to where the farmers leave their dead livestock. They do this to help feed the roving vultures which frequent the area. However, many carcases are littered along the hillside. But don’t fear! Live cows and sheep are also a common sight. On May 1st there is an annual festival which marks the day the cows are let free to roam the mountains and fields. They are not rounded up again till the winter when the grass has died away. These are truly free range animals. There are also four different species of snake to be found, three of which are harmless, the fourth being an adder, which is only dangerous if medical attention isn’t sought out in due course. Encoutering a camera-shy lizard is more common than a snake.

Along the route, the pine forest to the right has the nickname ‘el peine del viento’ after Eduardo Chillido’s iron structures on the rocks of San Sebastian. I think they named it so because the trees “comb” the winds as it hits the bare side of the mountain. Poetry is everywhere in this region!

The water fountain marks the halfway point of the route and signals the start of the harder, steeper and rockier climb to the submit. As the path widens up, there is a solitary farm selling Idiazabal cheese – and considering the freedom of the animals, it’s meant to be tasty. 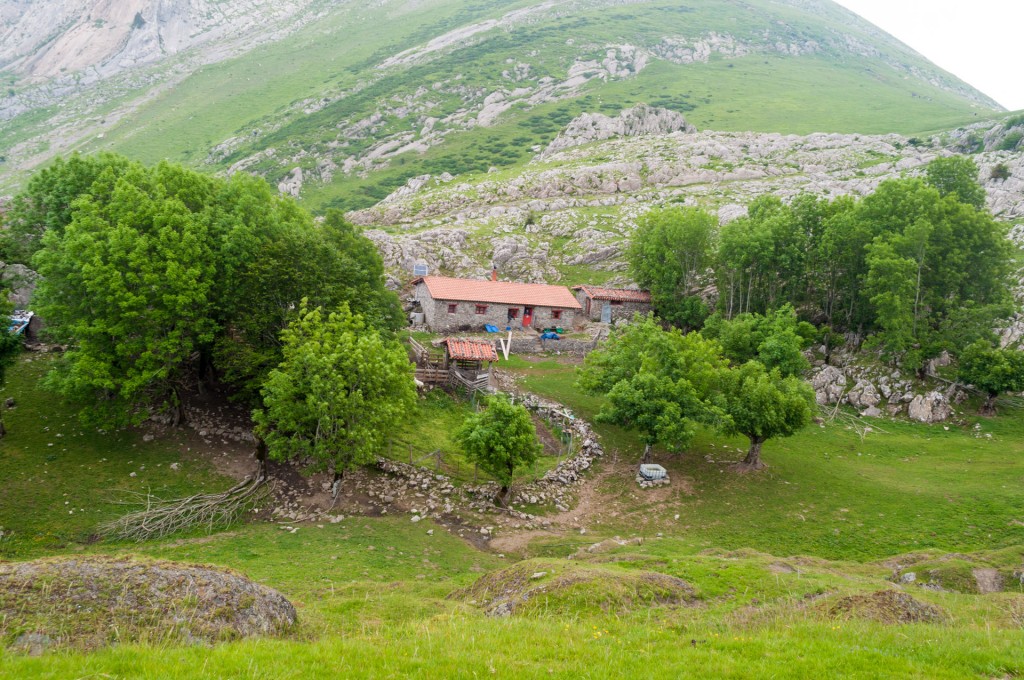 At this height, the peak still looks like an insurmountable wall of stone, with its faces as smooth and straight as slate. But continue rounding it and the path makes itself visible. In Basque mythology, it is said that two giants were playing pelota vasco and they wanted to demonstrate their skill and strength. One (or both) was a cyclops and he threw a great pile of rocks across the landscape, this pile of rocks landed on top of what is now Txindoki Mountain.

On a clear day, you can see all the way to San Sebastian and the Atlantic Ocean. However, on this particular trip, we were plagued by a haunting grey cloud which clung to the peak – so two hours later, when we finally arrived at the top and looked down, we were greeted by a wall of grey. It was my trip to the Empire State building all over again! 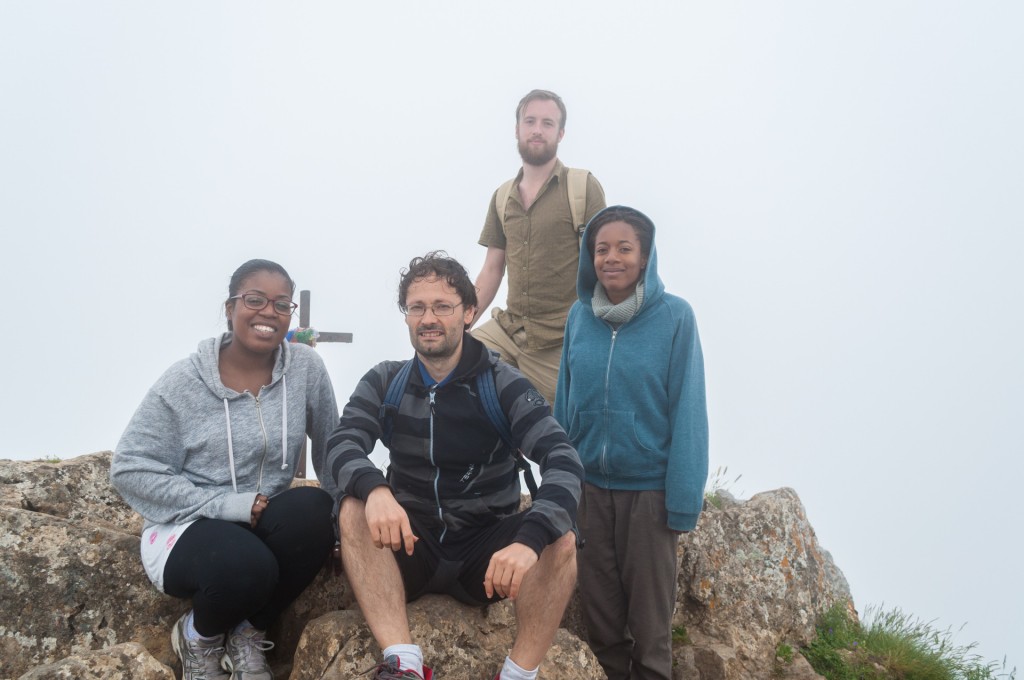 We finally made it to the top! It was very cold.

Getting off the mountain is just as difficult as going up as the descent is very demanding on the thighs and knees. But don’t worry, perfectly situated at the hemskirts of Txindoki is a restaurant; pintxos and cold drinks wait to congratulate you on a job well done.

If you have any walking tales of your own or have any questions about the trip, leave a comment below!

2 thoughts on “The Legend of Txindoki Mountain”