So what does Pintxo-Pote even mean? To put it simply, it (very loosely) translates from Basque as ‘just a bit of food and drink’. As a resident of San Sebastián I discovered that this Thursday night tradition has been going on for the course of a decade and usually pulls in a lively student crowd. Its popularity lies in the fact that from 19:00 – 23:00 all participating establishments will provide a beverage (beer, wine or soft drinks) along with a Pintxo for the nominal price of TWO EUROS. So with ‘just a bit’ of food and drink to try in each locale, Thursday night becomes the biggest bar crawl in every major city in the Basque region. Remember: this tradition does not exist in the rest of Spain – so leave your Paella and Flamenco at home! 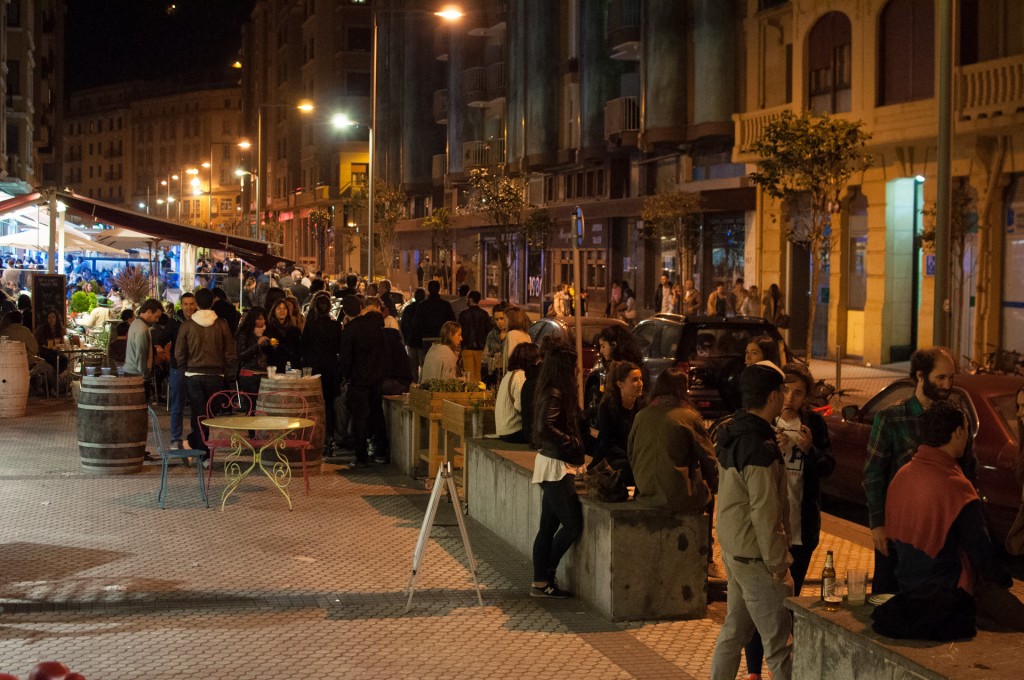 I have rounded up the absolute BEST bars for Pintxo-Pote, taking into account portion sizes, distance and atmosphere. Pintxo Pote is not to be missed, plan your trip around it as this is the only day of the week that a tourist can feel part of the city. 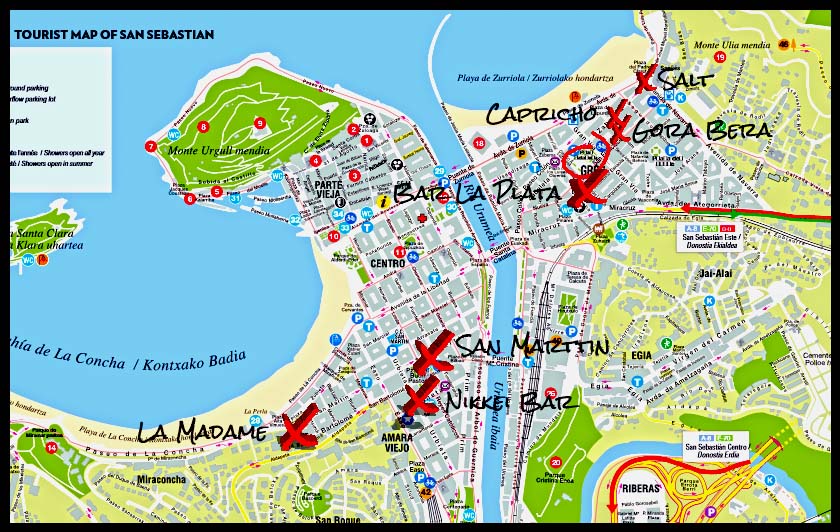 This popular joint is off the tourist path and sometimes forgotten by the locals. Situated on a backstreet corner, La Madame hands down offers the best Pintxo-Pote menu in the city. With a selection of hot bites served straight from their New York Times hyped cooks, La Madame is also the only bar (to my knowledge) which offers cocktails, hence Pintxo-Cocktail Thursdays! You can chose from a CosmoTxiki (mini Cosmo) or a MojiTxiki (mini mojito) and the food is certainly a taster of what the kitchen usually serves up during the week. Normally, you have a choice of Alitos (Chicken wings), Pork Dumplings, Cuello (Beef neck), rice/soup and mini-burgers. The only difference is that La Madame’s Pintxo-Cocktail price is €2.50, but that extra fifty cents is well worth it. Have two helpings here as this is the best Donostia will offer on a Thursday. I listed this place first as it’s the furthest away, the quietest but most sophisticated. San Bartolome, 35 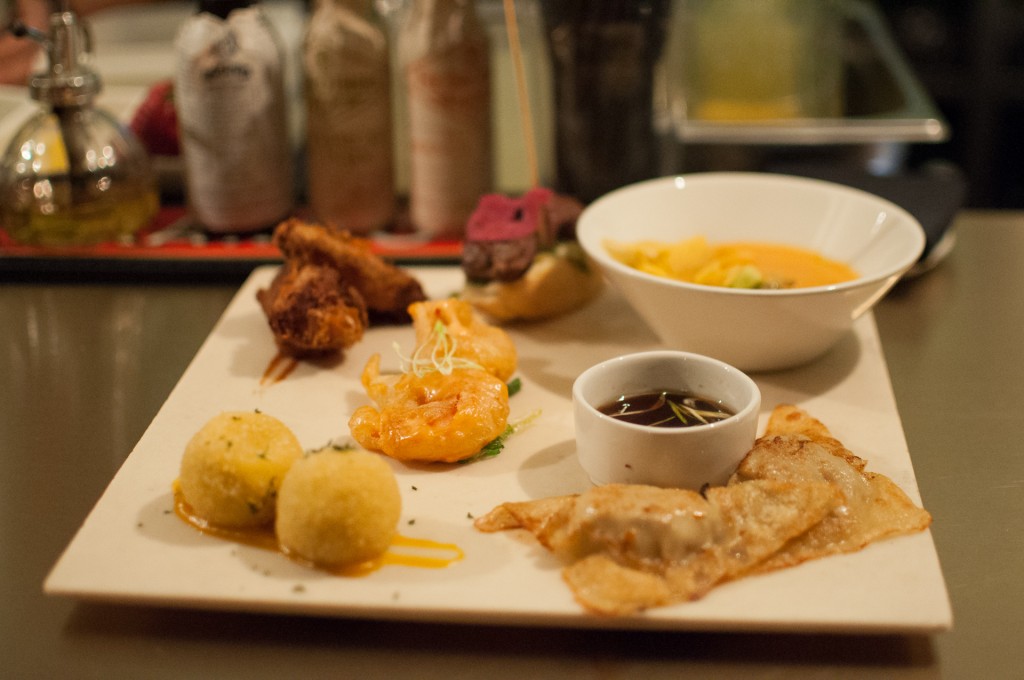 If this is small, then I’d love to see their normal sized Mojitos!

This hole-in-the-wall Japanese has a strong customer base with many groups of friends coming to eat here. In the entire city, this is one of the cheapest Japanese spots in town, don’t miss out on the Yaki Soba (€9.50)! But for Pintxo-Pote Nikkei offers up some Brocheta de Pollo con salsa saté (Satay chicken), Papa Rellena (fried meat-filled potatoes), Salmon Nigiri or a Sushi Roll: all of which I usually enjoy coupling with an Estrella. The bar gets cramped pretty quickly so don’t expect a seat. Actually, don’t expect to sit for the entire night. Urdaneta, 14 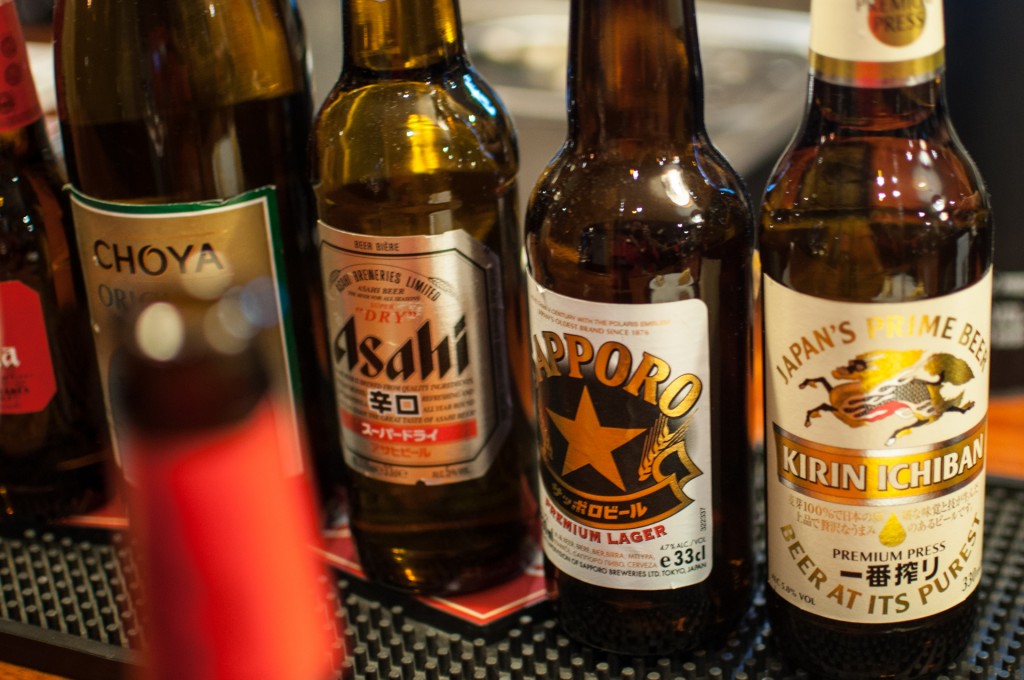 San Sebastián is a boiling pot for wealth and affluence, so it was only a matter of time before someone decided to create a night for its clientèle. Shy of one year ago, San Martin Mercado introduced Gastro-Pote, (Gastronomic) or basically meaning ‘posh’ food and drink. On the concourse level, a stage is set up for a band to play (you don’t get original music in Sanse, it’s always covers) whilst the weekday retailers for this indoor market prepare Pintxos for Thursday evenings. The prices do vary somewhat, where food is about €2 – €4 and the drinks at the same price. The great thing about San Martin’s Gastro-Pote is the variety in food, from salads to fish bites to cured meat platters – but it become very crowded, very quickly. Maybe have a drink, listen to some music then make your way over the river to Gros, where the party really starts. The images below are taken from my favourite San Sebastián socialite bloggers – sistersandthecity.com. Urbieta, 9

In the above map I have circled the San Ignacio Church square as this is where most people start their crawl, in the area of Gros. To a tourist it may be difficult to identify why some bars are better than others when they all seem to be serving the same food, but I’ve tried all the places around the square and Bar La Plata is definitely…um, better. The turnover is quick so the food remains fresh and they also like to microwave plates before they serve it to you. Unlike the other bars around the square, it’s more homemade items than frozen food. Pintxo Pick: I like to get the Empanadas or Bollo de Carne (deep-fried meat balls) because it’s always hot and incredibly spicy. The Paella dish here isn’t too bad considering. Padre Larroca, 14

Although this route loops around on itself, SALT was not left to last because a) the good pintxos finish quickly b) The crowds are horrendous c) The best is yet to come. I like SALT because it provides a more social feel and the people here are always interested in talking to someone new. A lot of Aussies, Germans and Brits flock to this place because of the large open space, its cool location and surfer vibes. The food definitely looks better than it tastes but you still get more substance for your money. Prepare to use elbows and handbags to gain attention for service though. Pintxo Pick: Trollitos Vegetales (veggie rolls), Pasta Boloñesa or Croquetas de Arroz Negro (Croquets with squid ink rice) and Albondigas (meatballs). If you’re in SALT at the height of summer, its beach front location and wide windows provide one of the BEST sunset viewing spots in the entire city. Avenida de Navarra, 2

I never know why I always insist on going to this particular bar, considering there are virtually identical spots along the same street, but Capricho wins me over with its nautical theme, fast service and outside seating (terraza). The crowd at Capricho are more noisy and energetic than most and enjoy having a sit, a smoke and a sip of Heineken. Pintxo Pick: Brochetta de Gambas (Skewered Prawns), Bollo de queso (fried meatballs) or Conos rellenos de Gamba (Prawn cones). I come here when the evening is drawing to a close and there is only one place left. Zabaleta, 55

Meaning ‘upstairs-downstairs’ or ‘highs and lows’ in Basque, this authentic bar and restaurant has great quality and freshly made pintxos. TOP TIP: there is a second bar on the basement floor, so head downstairs for more room, more choice and for pintxos right from the kitchen. It’s here that I like to get my cider (sidra) and the long-awaited Txipirones! A few of the other bars I’ve mentioned do the same thing, but not to the same standard. The oil drips from your lips, the flesh is rubbery but meaty and the bread is infused with garlic. Although Pintxo-Pote usually ends at 11pm, most bars will keep selling until everything is gone. I don’t like to arrive at Gora-Bera too late after this time on a busy day, but does also make the perfect place to spend the night drinking with friends and a crowd that spills out into the streets. The fact everyone has school or work the next day doesn’t stop the locals from staying out after midnight. Bermingham, 3 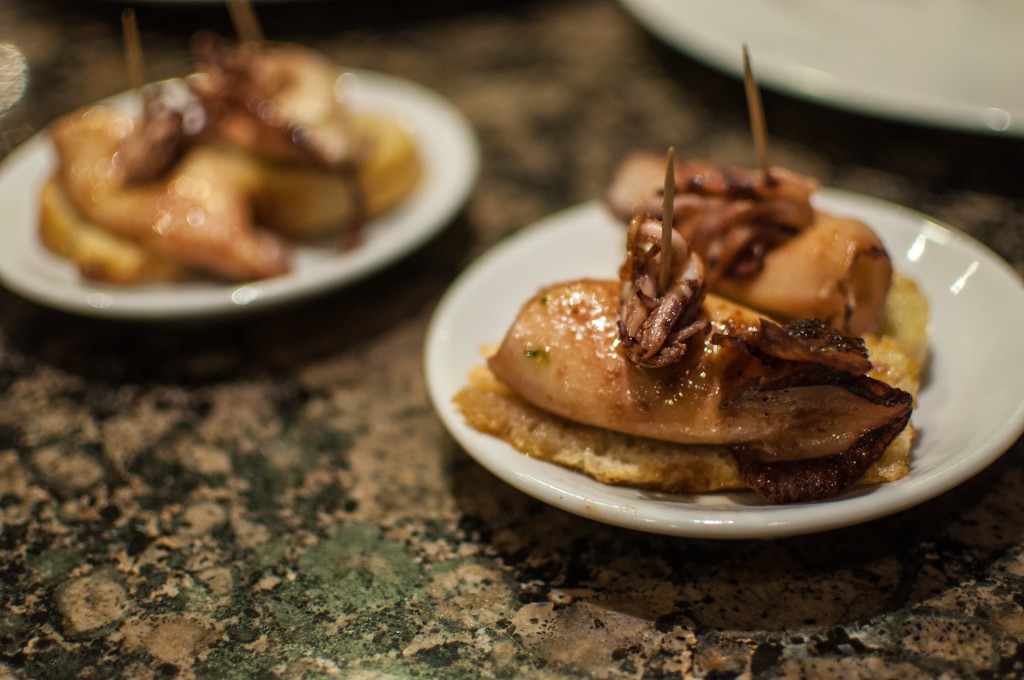 San Sebastián is an incredibly easy city to explore because this entire route is done by foot! So make sure you plan your trip around a Thursday and you’ll never forget the flavours, the laughter and the fun! I created this post because there was nothing detailed about Pintxo-Pote in San Sebastián on the internet, so you’ve benefited from my months of trial and error!

If you want a list of bars to AVOID during Pintxo-Pote, get in touch and I’ll send you the list *wink* ha!

3 thoughts on “The BEST Pintxo-Pote route in San Sebastián”