San Sebastian is one of Spain’s most modern and affluent cities, but with all its 21st century adornments it is still heavily steeped in tradition and Basque culture. La Tamborrada takes its name from the large drum used in traditional Basque music and is also the city’s most impressive festival. It draws upon its history and spirit for 24 hours of celebration. At the stroke of midnight every January 20st, the mayor raises the flag in Plaza Constitución to mark the start of the festival of drums. 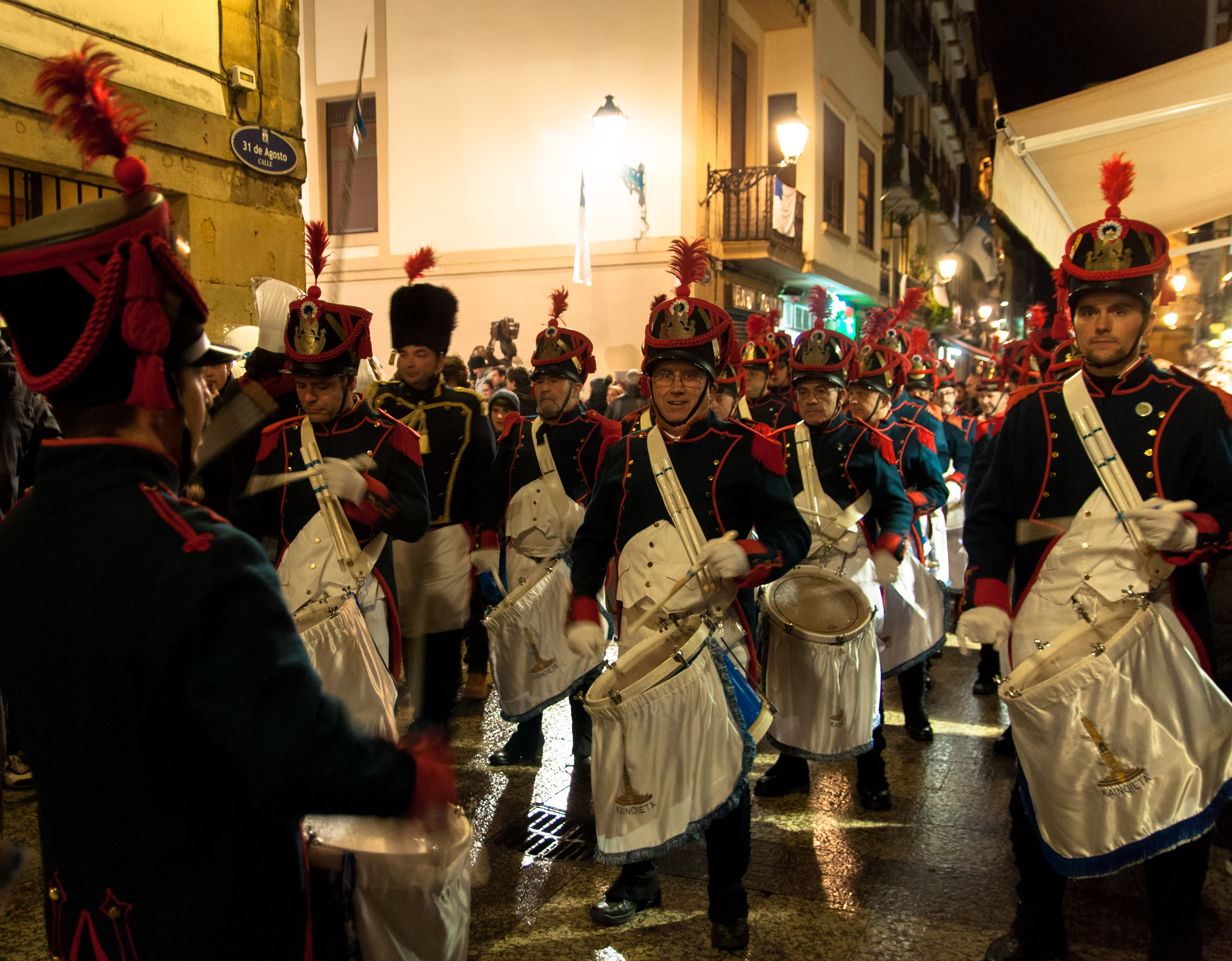 Although the inception of the festival does not have a solid date, it was brutishly born during the Peninsular War were French, Portuguese and British troops systematically occupied, “liberated” and burnt down the town during the early 1800s. La Tamborrada was meant to have been a mockery of the military troops that were garrisoned in the town, but now it’s a day of celebration of their patron saint and what it means to be Donostiarra (a person from San Sebastian).

Every quadrant of the city has their own día grande schedule, but the real hub lies in Parte Vieja, the old town. San Sebastian on a Sunday night is usually a moratorium, but for this night alone every restaurant, bar and cornershop have their doors and kitchens open. Not even the rain could deter people from spilling out into the streets in anticipation (and oh boy do Donostiarras hate the rain). My compatriots and I decided not to indulge in the main square event but watch one of the alternative ones on Calle 31 de Agosto. 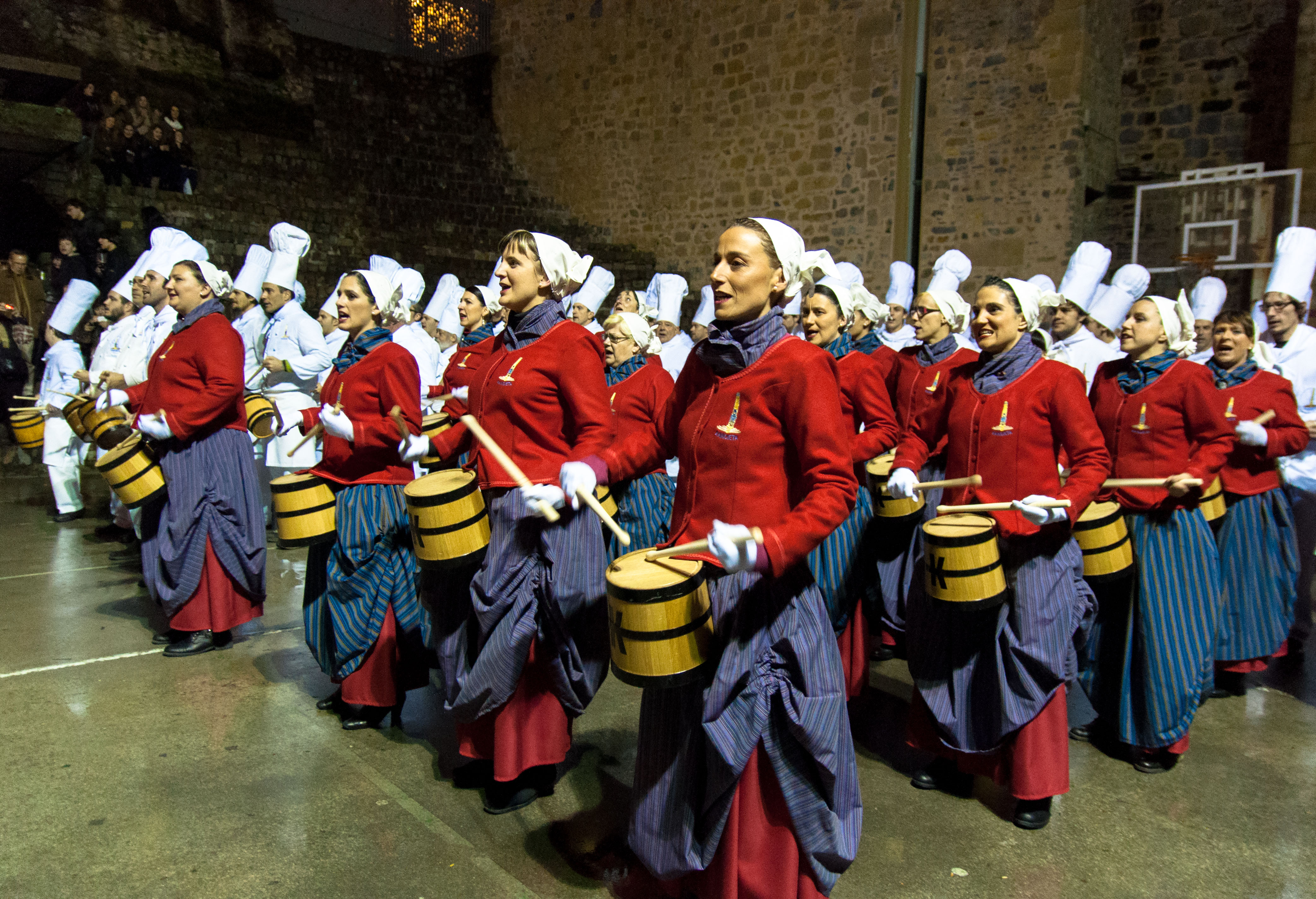 The brigade attired in navy and white tentatively shuffled into position on the cobbled street. Adjusting their drum straps and red-plumed hat. Two minutes to go. The Chef regiment were packed closely behind, but you could only see their tall white hats floating above the crowd like clouds. One minute to go. Women in traditional outfits flittered through the crowds, bright white gloves and drumsticks at the ready. 30 seconds…

I looked at the soldier who stood on my right; he smiled across at me and as I smiled back, he gently placed his fingers into his ears and looked to the sky. 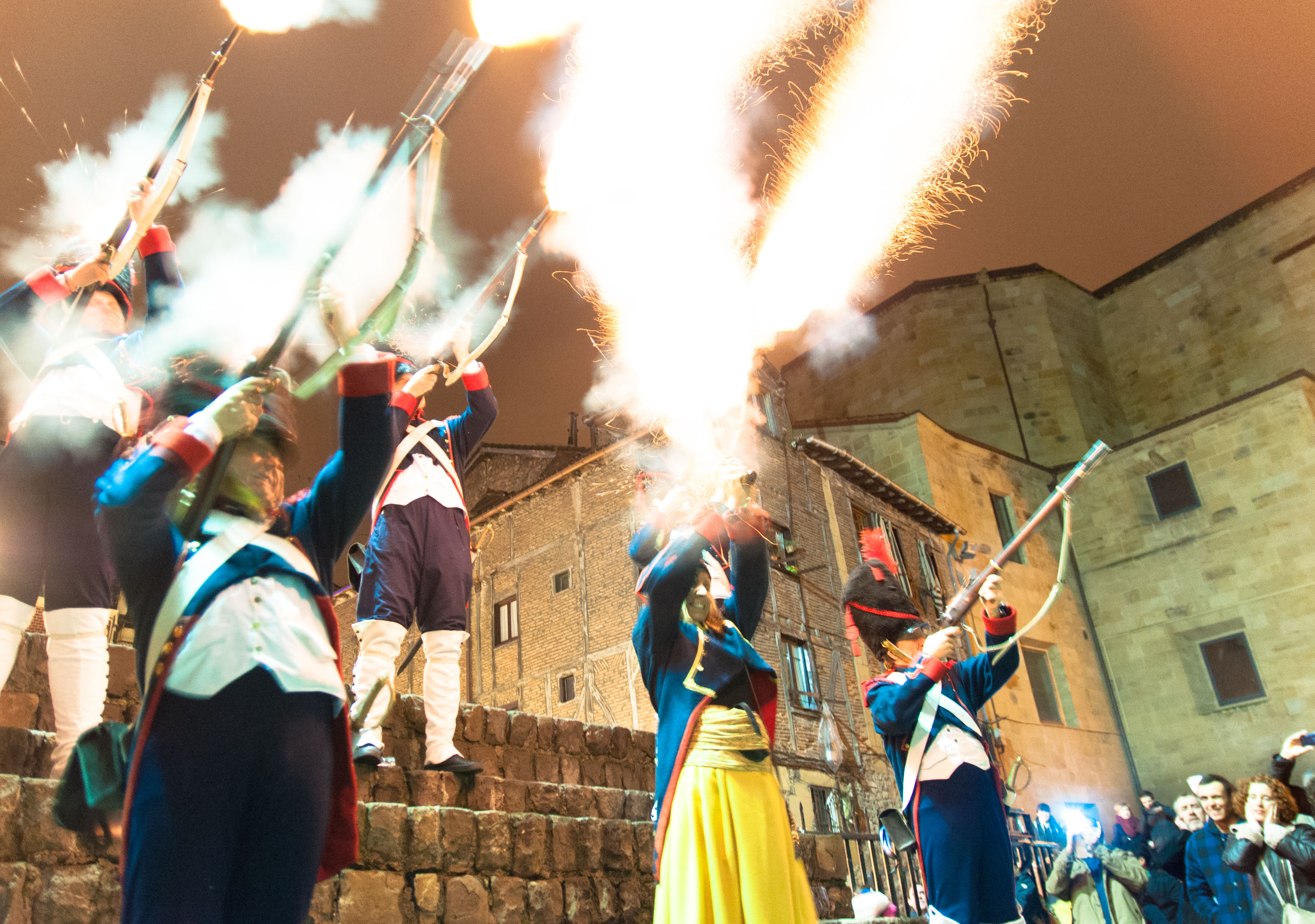 Multiple gun shots were fired to mark the start of the day. The sound was so loud and unexpected that I felt as if it ricocheted and hit me in the chest (and yes, kah-bahng is my impression of a Musket). Looking back now, that soldier’s smile seems more like a smirk.  But the 24 hours of drinking, singing and banging (of drums) was underway.  As mentioned previously, there are various marches around the city and the majority of these parading musicians are formed of different Sociedades Gastronomicas – Gastronomy Societies (this is another charming aspect of Basque culture: quite like the Illuminati, but food being their philosophy). So this explains the rather bemusing spectacle of chefs, drumming on barrels and wielding forks and knives. 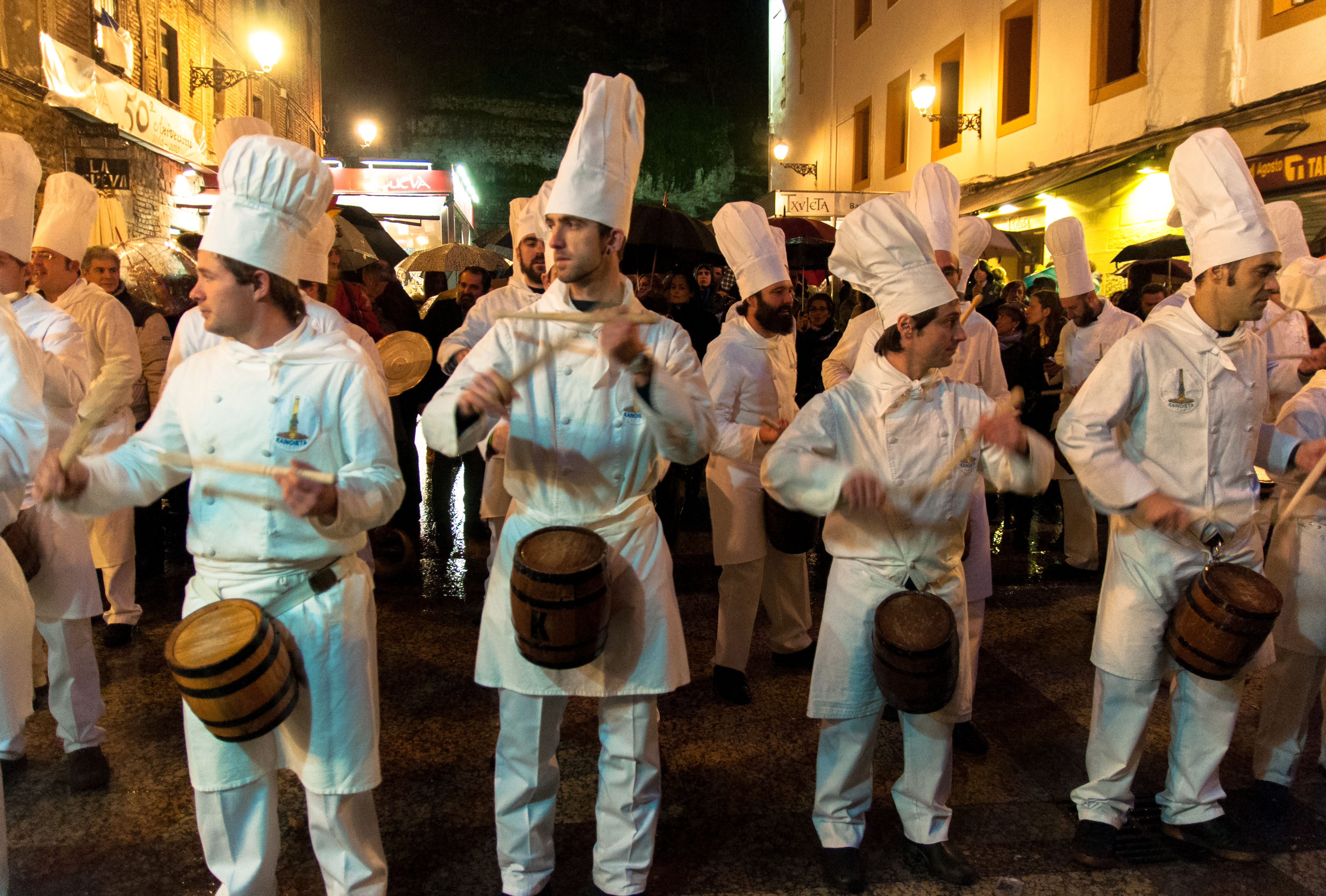 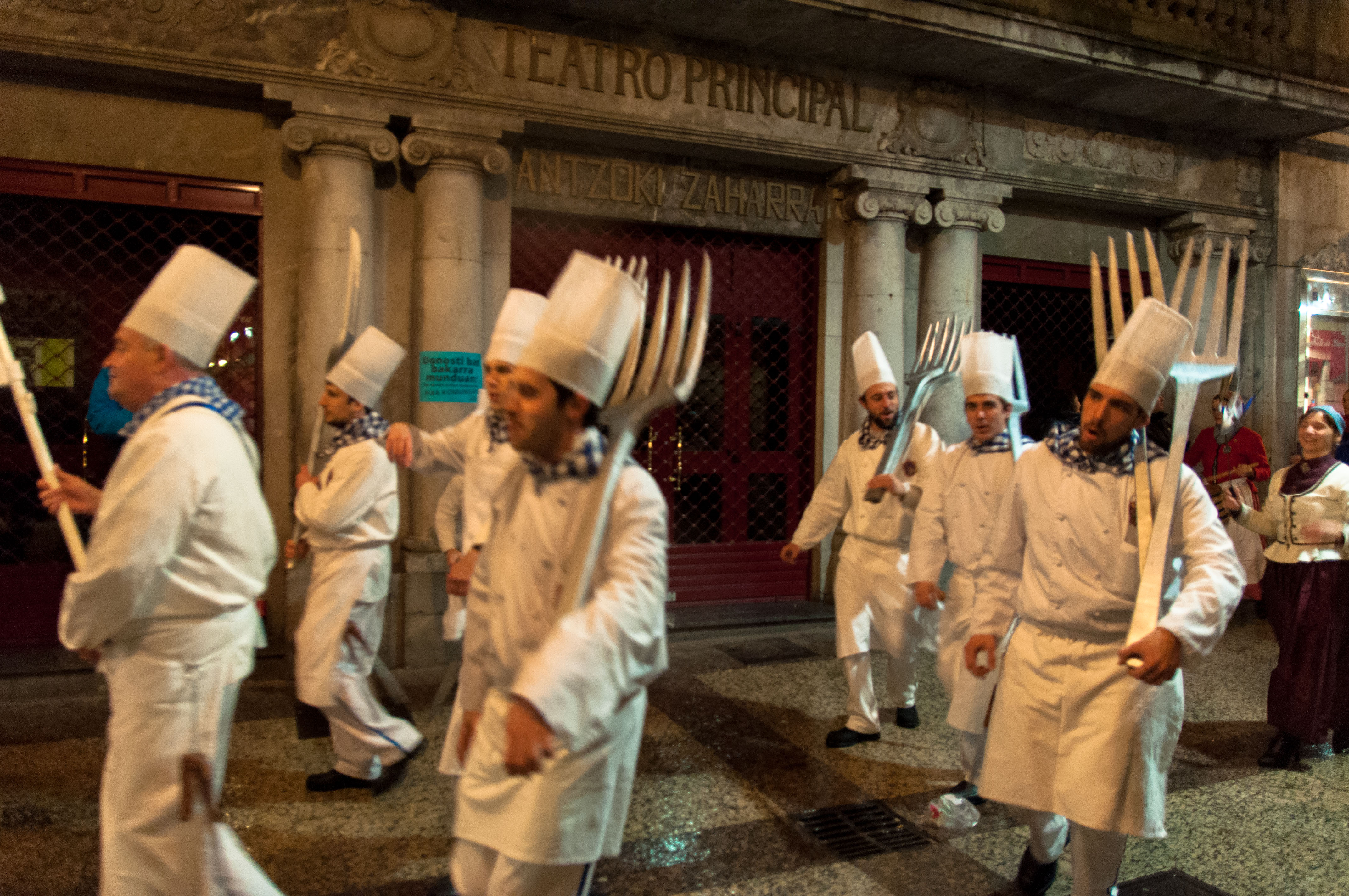 As to be expected, January 21st is a public holiday, but for those who work out of town, the rules do not apply (so singing and running around the streets till 3am with an alarm set for 7am meant I wasn’t the most talkative person at work). At midday is the children’s march, where miniature grenadiers and brigadiers toddle through the streets and adoring parents stand on top of each other to get a picture of a child, I’m pretty sure, they see every day. With all the commotion and flashing camera lights, any passersby would have thought it was Dresden (I could have chosen a better analogy…).

This year, there were 127 drumming groups that toured the streets, but what makes this festival even more special is that for 24 hours the same tune is sung on repeat.  I’ve written a rough English version of this centuries-old song. 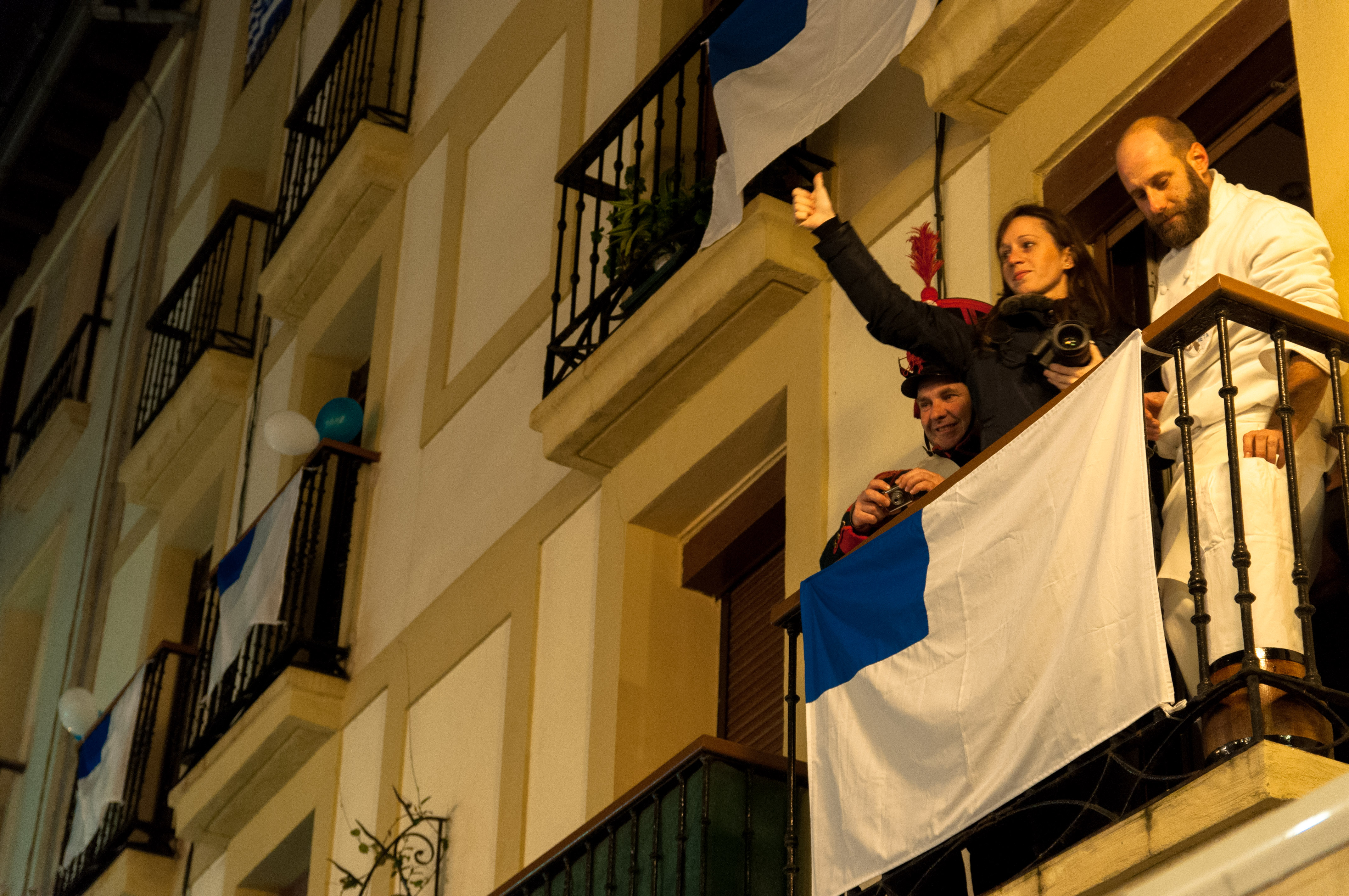 This is a really visually interesting festivals that brings the crowds out, and shows the rest of Spain that the Basque definitely know how to have a good time.

The Drums of San Sebastian