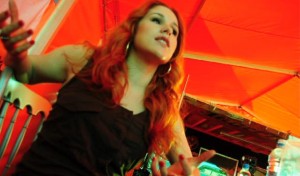 Sitting under a neon orange Jägermeister tent, backstage at Beach Break Live, camera in hand, notepad at the ready – there is an audible buzz of excitement whilst waiting for an artist of such pint-sized proportions who has the ability to command an entire crowd. A figure comes bounding into view from the horizon, holding a bottle of water, simply clad in greyish dungarees and management struggling to keep up behind her. You’re up! Two minutes!  That’s me! As I edge towards the table I’m greeted by a civil, no-fuss smile and handshake so I plunge straight in: “When everybody in London is trying to move out for university, why did you stay?” It took less than a second to respond and I was immediately struck by the opaque non-answer which she gave; “Well, because I was making my album and doing music and stuff – I dunno, I felt like I had to be in London and I’ve had so many trials in my life and I love the industry. It’s always been about making the album and doing my music – I dunno, I just felt like I had to be here. There’s nowhere else to go.” 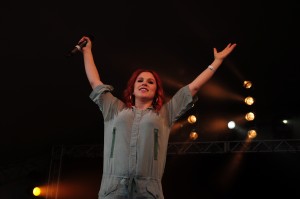 She glared at us as if saying ‘what other answer could I have given.’ I gave a general muttered agreement under my breath then looked down at my notepad and asked about her experience of playing to student crowds. A moment’s pause and she looks at me inquisitively, tosses her red locks over her shoulder and shakes her head saying how she has never played a student crowd before (I was pretty sure she had), so the question hung in the air until she screamed: “Oh god yea! I’ve done a couple of university balls actually, students are crazy man, they’re just crazy…erm…they’re mad. They love a mosh. They just love a mosh!” I smiled and swiftly glanced at the next question whilst she readjusted her wooden seat, ready to start paying more attention to the interview: “What hangover cure would you recommend for Queen Mary freshers?” Immediately, her face lit up as I have found a topic that she actually cared to talk about: “A can of coke is the best hangover cure ever! Because it’s so cold and refreshing but it’s also, like, really sugary and tasty so it takes away the alcohol taste and all the sugar in it, it like, perks you up! So a can of Coke or Lucozade…I can’t drink water, I dunno how people drink water.” By the end of this excited tirade she is sat on the end of her chair, legs akimbo and imitating the stance of a weight-lifter by flexing her muscles as she envisioned the invigorating qualities of having a Coke after a night of raving it hard. 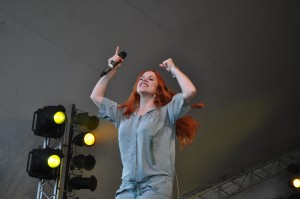 Feeling a lot more comfortable, I put my two cents in and pointlessly respond “Yea! I hate Water! It makes you feel full!” Still beaming, she continued her philosophy that “with coke, all the bubbles make you feel nice.” Her expression and manner showed me that she was definitely a girl that liked to party – just like any other person who listens to her records. With renewed energy, I edged on and asked how she can relate to students moving away from home: “Well, at the moment, definitely on tour and stuff. But actually, it’s alright really ‘cause my band are really nice so I’ve got good company.” By now, the backstage manager was staring me down from the sidelines, tapping at her watch and making it more than apparent that I was running over time. Katy was none the wiser so I pretended not to notice either. I realised, however, I have only one question left, the big one, the philosophy and inspiration behind her extraordinary debut album Katy B: On A Mission. 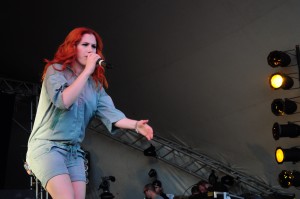 As customary, there is a gaping pause before the words come to her: “The whole album is just like my time at university and even if there are songs about going out and enjoying myself, songs about love and lots of different things it’s really representative of me really. Some of the tracks are more Dub-Step, there’s some drum ‘n’ bass, and even some with more of an R‘n’B feel; so each song is like a representative part of my personality…depending on where I would go, depending on if I go to a club and listen to Dub-Step, or go to a another club that’s Funky, it’s all a different part of my personality, I can’t chosoe really!” As I said my pleasantries and began to make an exit, Katy rose with me, confused I moved out of her way thinking she was attempting to get past me. But no! She laughed and extended her arms out for a cuddle, leaning forward I joined in a massive embrace as other press looked on and wondered why they failed to receive the same level of warmth.  Walking back into the chaos of the festival, I avidly awaited her performance that afternoon as I realised I had just been in the company of one of the most frank and genuine individuals in the industry.

Check her out on www.katybofficial.com

Taken By Trees: Other Worlds

3 thoughts on “Katy B: Talking About Her Mission”