There is such a world of talent out there, almost everyone sings. From shopkeepers to removal men, everyone wants in on the action but very rarely do you find an artist that matches ability with talent.

While speaking with him, it became quite obvious quite quickly that he as a loving respect for the great classic soul-singers of the past. Keeping in tune with the current hype on electronic and pseudo-ambient music, Jamie Woon masterfully infiltrates the scene with such an organically soulful and tender voice that you catch yourself unaware of how much time has actually gone past. 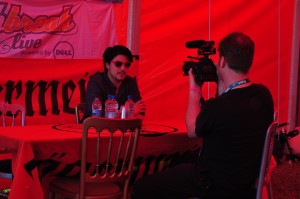 Did you have a musical upbringing?

My mother was a singer when I was young, I guess this had a massive influence on me but I’ve always loved music

When was the moment you realised “woooah…I’m famous”

As accurately as possible, which artists would you melt together to create “Jamie Woon?”

[I laugh, he laughs, then looks at me. I quickly realise he meant every word of what he said]

Who would you love to play on stage with, living or dead?

How do you feel about being one of the few male solo singers in the U.K.?

There are plenty of other singers out there, singing all types of stuff. I’m not the only one. My voice was my first instrument, it’s got me this far and I’m going to keep to it.

So what should Jamie Woon fans expect in the future?

When it was time to leave I quickly asked him to remove his shades for a moment. Just so I can see his eyes. He grins widely and boyishly – he very briefly considers it then changes his mind and asks, “how am I supposed to fool people into believing I’m good-looking then?” I throw him an unsatisfied glare, “fair enough”.

Check him out here www.jamiewoon.com

One thought on “90 Seconds With Jamie Woon”