Is the art of “dressing up” for the Opera dead?

Over the weekend I attended an Opus Lirica adaption of Donizetti’s opera, Elisir D’amore. So, I thought I’d use this occasion to “dress up” a little – that’s what people do, right? I sought out one of two dresses I had stuffed into my luggage before moving to Spain and decided to take it for a night on the town. I have been to an opera once before, in London, to watch Madame Butterfly. To my recollection, I believe half the crowd wore jeans and I think a young couple even came in with a bag of Tesco shopping. Is the art of attending the Opera dead? Do people no longer look forward to great theatre events, like Anastasia’s first time at the ballet? I suppose, it’s an antiquated form of entertainment for some. Why squint from one hundred rows back at a large woman thrusting her arms about when you can sit comfortably at home watching cat memes? Why travel for culture when you can create it on YouTube. Tickets for fantastic drama, theatre and arts events are at an all-time low, but yet this new “generation” are reluctant to appreciate it.

In over a hundred years, famous theatres have remained unchanged – gilded plasterwork, crystal chandeliers and impressive façades beckon you in with awe. However, audiences have moved on. They have abandoned its opulence and a culture which only serves as mere background fodder for an instagram post. This same generation believe Captain America: The Winter Soldier is an exemplary piece of a twenty-first century epic melodrama. 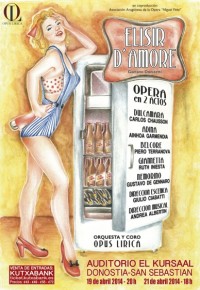 I guess the change occurred with the introduction of Dress Down Fridays, the hobo-look being a trend and celebrities attending the Oscars in baggy jeans, a t-shirt and a pair of heels. Looking at the queue leading into the auditorium, I noticed crocodile skin purses, dog-tooth skirts, shawls and shoes. Although this description may not fit a UK audience, I am happy to say that here in San Sebastián, at least, the rules for attending an opera are still observed. But for how long, only the internet will decide.