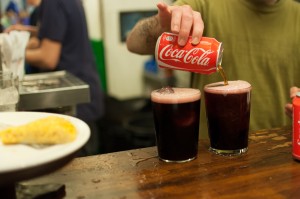 Kalimotxo is a drink for the younger generation. Perhaps in other countries people would consider you a chav or a council estate stereotype for mixing red wine and Coca-Cola, but here, it’s all the rage. Served with boat-sinking blocks of ice, it’s a great summer drink that, if you’re not careful, can creep up on you and slap you in the face in the morning.

Sidra: Cider isn’t a very international drink, additionally, it’s only really the north of Spain that tend to drink it by the gallon. This is grassroots stuff as it´s very dry, very tart, very flat, very…straight from the fermentation barrel. Bars also tend to sell cider by the bottle for pairs or groups of friends to share. Also, don’t be a tourist…cider is poured from a height to let the air in and give it that additional flavour and body. (It´s also a great display of how sober you are!) Some bottles even come with instructions and recommend you get at least 30cm of air time before your drink hits your glass.

Txakoli: If this were meat, it would be Veal. Txakoli is basically the substance you get half way into the white wine making process, therefore, it´s quite rich and sweet. It´s produced in this region and quite difficult to get anywhere else – so aprovecharlo cuando se puede (take advantage of it when you can), #YOLO. Ironic hashtag.

Straight from the vineyard 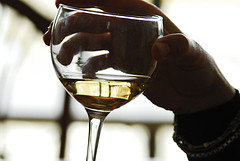 Vino: Wine is usually one of the cheapest things you can get in a bar. The citizens of non-wine producing countries tend to prat about which bottle to purchase as they attempt to weigh expense against quality. But that doesn’t matter, this is northern Spain and Navarre and La Rioja are two of the most renowned wine regions in the world. Remember: House wine is good wine. 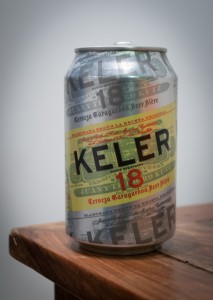 Cerveza: And of course, we have Ye Olde Faithful – Beer. It´s a common thread when venturing to continental Europe that beer etiquette quickly diminishes. Some usual complaints are: “There´s more head than drink.” “They only filled half the glass.” “My mate´s got more beer than me but we both paid the same price.” Expect to be served with tumblers, but if you really want to know how much you´re getting – a Cañita, is half a tumbler of beer. A caña is a full tumbler (including the head) and a Jarra is the closest thing you´ll get to a pint.  Also, don’t expect them to ask you which beer you want, if you don’t specify at the jump then it will be whatever is on tap (for the most part that would be Keler…not bad really). 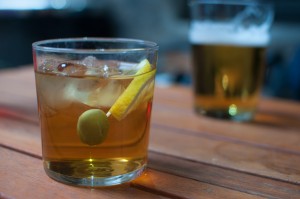 Mosto: for any youngun’s or abstainers, this tasty grape juice derivative is refreshing and devilishly sweet. A good bar will always serve it with a green olive and a slice of lemon on ice. 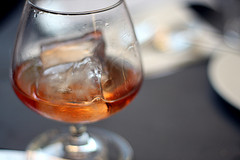 Unless you’ve got the doe, don’t bother asking for a mixer. Even though they’re thankfully heavy-handed with their quantities (1/2 gin:1/2  tonic), you’ll be parting with 6 /7 euros each time. One round can get pretty expensive. Patxaran: This Basque-only drink is definitely off the tourist track as it´s a sweet liqueur made from aniseed, sloe berries and an assortment of coffee beans and vanilla for aroma: this is how it gets its deep colour. Mostly served as a digestif after dinner. 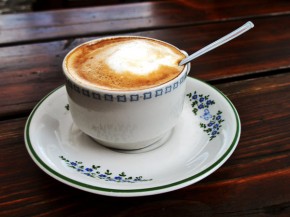 Café: Coffee is another staple and the general quality far exceeds Spain’s fellow European counterparts. However, don’t expect the same amount of superfluous fodder you get at a Starbucks (frappuccinos and macchiatos don’t exist here). Almost every establishment serves coffee but if you don’t specifically say café con leche (coffee with milk) they’ll just give you an espresso (FYI: If you ask for an americano, an espresso is what you’ll likely get. Why get fancy, eh?

Chocolate Caliente: Don’t get excited, now. Hot Chocolate is my favourite beverage but here in the Basque Region (and I’m sure other parts of the country), this isn’t just your normal drinking chocolate. When you order hot chocolate at a bar, what you’ll more likely come face to face with is a chocolate custard. The evidence is in the picture – thick, gloopy, rich and served with a spoon (mostly used for dipping churros into). The closest thing you can order is Cola Cao (Spanish version of Nesquik or Nestle) which is served in a packet and comes with a glass of milk. Mmm…I’d rather pass, thank you.

Now if all this drink talk is making you feel a little parched and you need some water, many of the cities´ water fountains should be able to accommodate your needs.

If you´ve like this post then use the social buttons to let me know. Also, if there´s anything you want me to investigate about Basque culture then get in touch below!