It’s always difficult to know where to start with this kind of festival. The weather, the audience, the city, the price of drinks… these weighted variables all have to be factored in to portray a faithful image of Bristol on the last Saturday of May 2013. Dot To Dot shares the same structure as the Camden Crawl and Brighton’s Great Escape: let’s swap fields for cities and canvas for brick walls. Due to this rolling nature, formulating a plan on who to watch next becomes tricky with over 100 artists sprawled like confetti across 11 venues all vying for the public’s attention. Looking around at the wristband collection point, squadrons of festival-goers can be found making strategic mathematical plans of attack: next location = popularity of artist x walking distance of venue / cigarette break allowance + av. price of pint. Other tactics also involve flipping coins and pointing blindly at the day’s line-up.

With the sky taking an unusual hue (blue) and the West Country cider in abundance it is a difficult feat trying to keep the crowds inside. People feel the need to take advantage of the fleeting warmth rather than subject themselves to a dark room whilst clutching a cerveza with the picture of the sun on it. But for those who do want some late afternoon entertainment, In The Valley Below have a friendly-neo-gothic performance and hold the audience’s curiosity. The tuneful male / female duet works through the crowd with hook-ridden songs like ‘You’re The Last Soul’ and other 80s-tinged numbers such as ‘Palm Tree Fire’. Half their intrigue lay in the large metal chains that encircle their tombstone synthboard – alas, our charming singer picks them up for the last songs and used it as a makeshift tambourine. Totally dark, dude.

One of the highlights today is having the pleasure to hear Dan Croll play ‘From Nowhere’, the track bringing a summertime bliss to the belly of the moored ship that is the Thekla. Croll has the unique ability to write music within the same vein but not make it repetitive. ‘Compliment Your Soul’ and ‘Home’ also get a great reception from an appreciative crowd that stick it out to the very end of his set. With a handsome backing band that sing in unison, a word-perfect vocal and beautiful chords, it wouldn’t be surprising if his name was headlining next year. 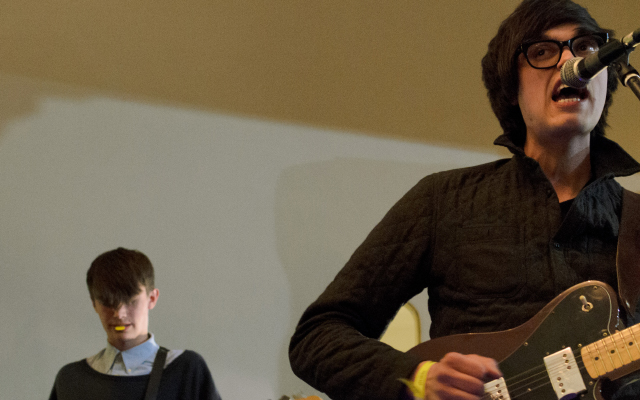 Deciding to hang about for a lesser-known entity is always a risk, but in this case Story Books (above) prove an unforgettable choice. Their youth in the industry is scrawled in red crayon all over their faces. They play with confidence and honesty, endearing themselves to a welcoming public. The Birdcage is one of the best venues as the annexed vintage shop gives people on opportunity to do something in the intermission other than stare at their feet. If desolate, yearning lyrics equate to darkness and an introverted voice and contemplative air means moody then so be it; their music is ultimately uplifting and emotive.

Dot To Dot visits many wonderfully small venues, but while much is offered for the reasonable ticket price, many of the featured locations are free to get into on an ordinary day and the bouncers aren’t too bothered about who has a wristband or not before it turns dark. By midnight, frustration can be sensed from attendees who keep being denied entrance to venues due to capacity issues; thankfully they quickly remember that there are various non-Dot To Dot establishments around, so wristbands are disbanded with and alternative entertainment options are sought out. With the likes of Foals, Florence + The Machine, The Temper Trap and Metronomy having taken their rites of passage through Nottingham, Bristol and Manchester, Dot To Dot puts music fans in good stead to say one day, “I saw them first”.

We Are Augustines @ Heaven