Combining the musical styling of Bright Eyes without the angst and the fragility of Daniel Johnston (with the ability to sing)- Chad VanGaalen releases his fifth album, Shrink Dust.

Having never worked in a commerical studio before, Chad is a fervid illustrator and artist, who creates most of his own album artwork and has also released animations for various contracted and personal projects. This intrinsic creativity is present throughout his music and provides an escape for the curiously inclined.

Chad has called this solo release “a folk album“. Perhaps in its structure and themes on difficulty in love and life, but there’s another subgenre at play as it’s also an essay on the nature of transformation and loss. His love of multi-instrumentalism is evident as both acoustic and electric guitars are swaddled in moaning cymbals, peppered with dischordal synths and rocked gently to sleep by a wandering woodwind in the opening track ‘Cut Off My Hands’. There’s an acute mix of natural and modified sounds, such as ‘Where Are You’, the music hall acoustics creates a reverb that breaks down the partitions between each instrument, merging them all into a singular wall of sound. 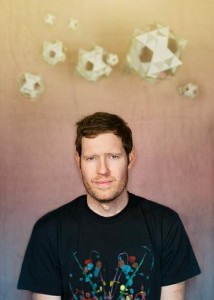 With visual lyrics, Chad VanGaalen disembodies the human and transforms it into something other worldly. His hands are “… like a pair of bloody crabs” (Cut off my hands). “My head was buried underneath the stone…” (Weighed sin). “…two bright hands that grew out of my shoulders” (Monster). There is a metamorphosis in process here, which, for any other artist would have been a metaphor, but Chad’s lyrical vision finds the concrete in the abstract. Every word is intended, never inferred.

‘Weighed Sin’ is where the tenderness in his voice is really heard, as his verses slips from soprano to countertenor like a silk dress gradually being pulled to the floor. Distinctly shying away from the commercial, Chad VanGaalen is an explorative soul and although his frightening world is separate from ours, he makes a peaceful journey of it. This is one of the best albums to come out of 2014.