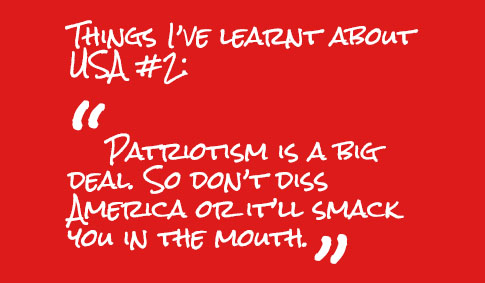 Philadelphia is known for two things: the home of The Fresh Prince and the first capital of the United States. So, if you like history, this place is for you. I was staying at the HI Apple Hostel. If I hadn’t arrived in the bright early afternoon sunlight, I might have been a bit more dubious about its alley-way entrance. Nice. Clean. Hospitable. After I had rammed all my things in the locker, I was immediately faced with the question, what do I do now? And no sooner had I asked myself this question than someone appeared at my shoulder and said, “You comin’ to the park?” My reply was in the affirmative. 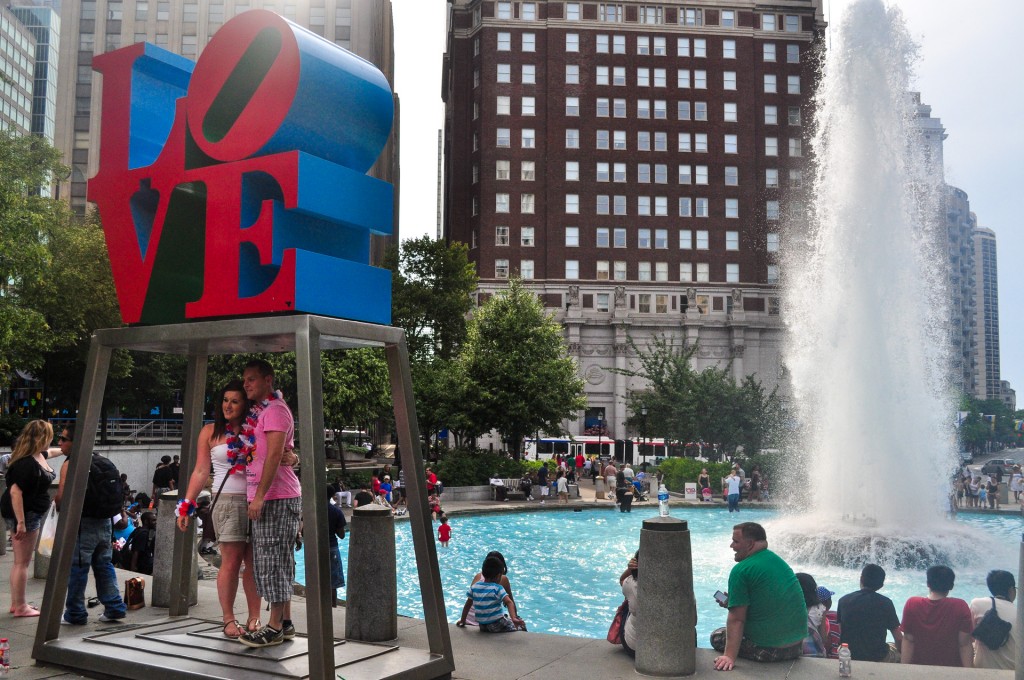 “Good, ‘cuz er’ybody gonna be there. Like tha whooole hostel” and he widened his arms to emphasise this fact. I decided to wait in the loby area until the mass exodus began. The whole hostel were indeed on their way out so I asked where everybody was going. Benjamin Franklin Parkway was the destination. Cool….I said nodding. Everyone seemed to already know someone so as the party made their way for the main street I felt like a mosquito buzzing from one attractive source of conversation to another – not quite finding the right fit until I met Sean and Toby (who shall reappear in my trip). So, what’s happening in the park? I asked, I got an incredulous look and this baseball-capped Scotsman then replied, “It’s July 4th” I nodded and said cool. He could see that it didn’t quite register, “It’s July 4th.” He repeated, “Independence Day?” I stopped nodding and a flood of realisation hit me, this party just got more exciting. From all the films I’ve seen, U.S. Independence is meant to be a big deal. I felt excited to be witnessing something I hadn’t even planned on seeing. So along with my new companion and another friend (for memory’s sake, let’s call him Dwayne) we shared the typical, where-d’you-come-from-where-you-going chat.

Everyone settled into the park, sprawling out under the sun like lizards warming their blood. The hostel organisers had brought BBQ supplies and were freely handing out tasty burgers in buns. Dwayne hadn’t yet left my side. He was talkative, athletic, musical…and had the rarest grey eyes, which everyone in the hostel commented on. Along with playing the guitar he was pursuing an acting career in Hollywood and his doppleganger was Gary Dourdan (black guy with blue eyes in CSI). After he excused himself to find a toilet, a girl hurriedly came up to me and said, “I don’t think you should talk to him any more.” I immediately got defensive. What, was this primary school? Was this chick jealous? She then continued, “well, yesterday my friend spent the day with him. She thinks he gave her a date rape drug. She barely made it back to her bed. She didn’t come to the park because she knew he would be here. I’m not one hundred percent what went one but it’s better you know, right? Just in case. I’m really sorry.” She scampered away as soon as she had appeared.

First ever game of beer pong!

Looking at the can in my hand, I chucked it then proceeded to pack up and move to another patch of grass. Dwayne was one of the coolest people I had met on this trip, but regardless of whether the girl’s story was true or not, there was no point taking any chances. Listen to your sisters. Other than that, my hotel family were amazing. I learnt how to play beer pong, ran around with sparklers, did cartwheels and talked to everyone under the sun. 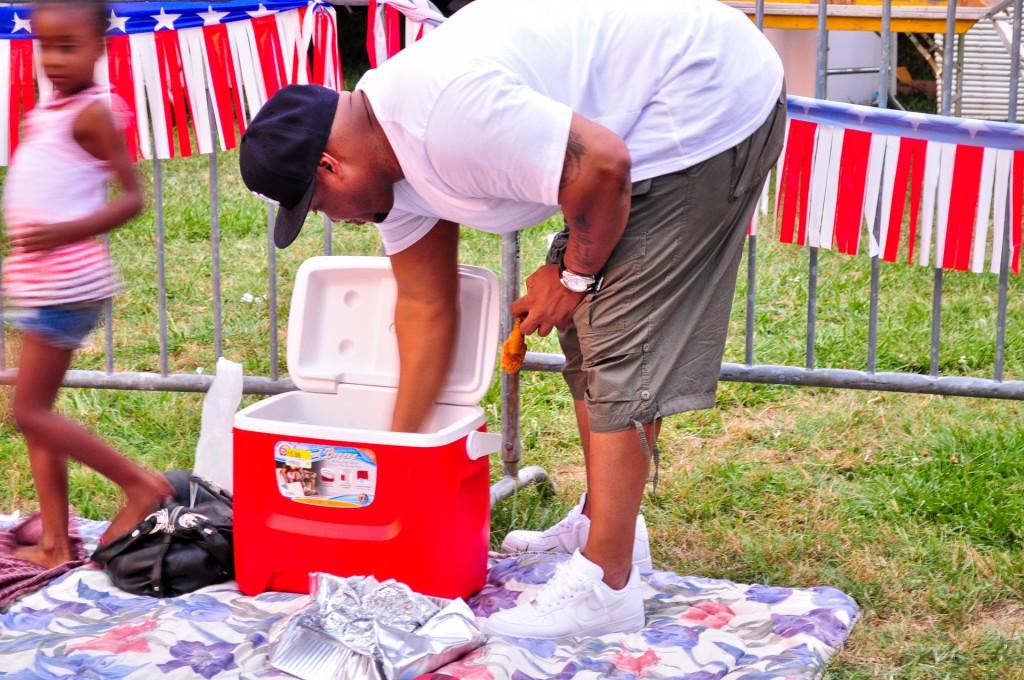 Not to tar the entire nation with the same brush but I have been asked by various Americans whether we, in Britain, celebrate July 4th….errrr, no. I can’t say that we do. But this furthers my opinion that people have actually forgotten what this festivity is about and use it as an excuse to have a royal piss-up. The day after, I decided I might try to learn about this vast nation. I needed to understand the roots of the country before I could go off and play in its foliage. But before all that – I was going to enjoy some fireworks. “Happy ju-ly four, y’all.” 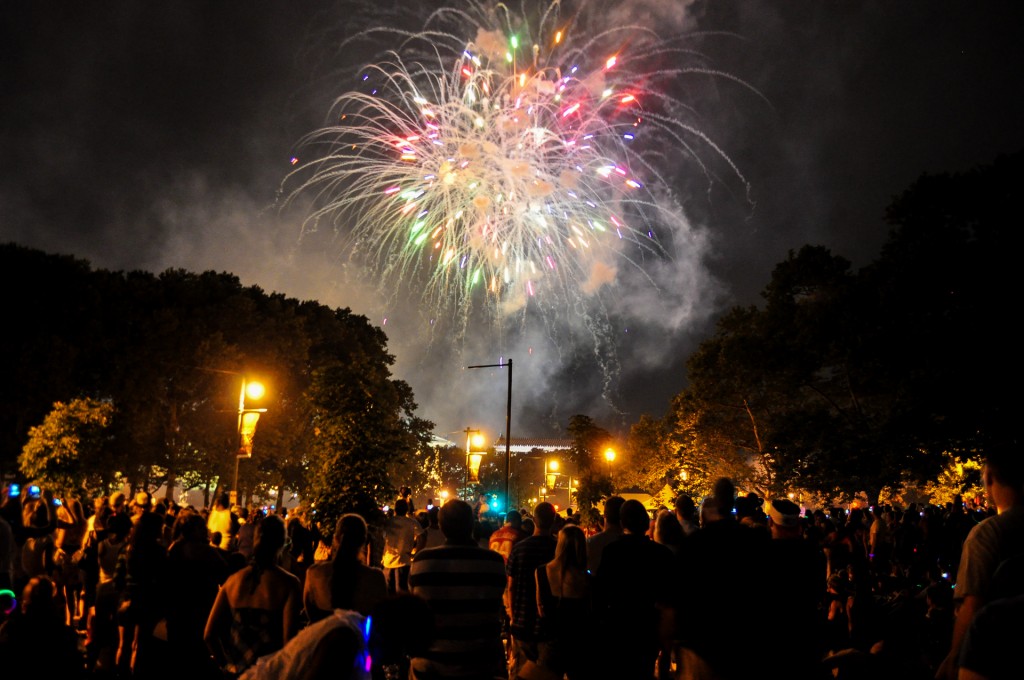 After party in the fountain

Reppin’ all the nations

There’s a China Town in every town 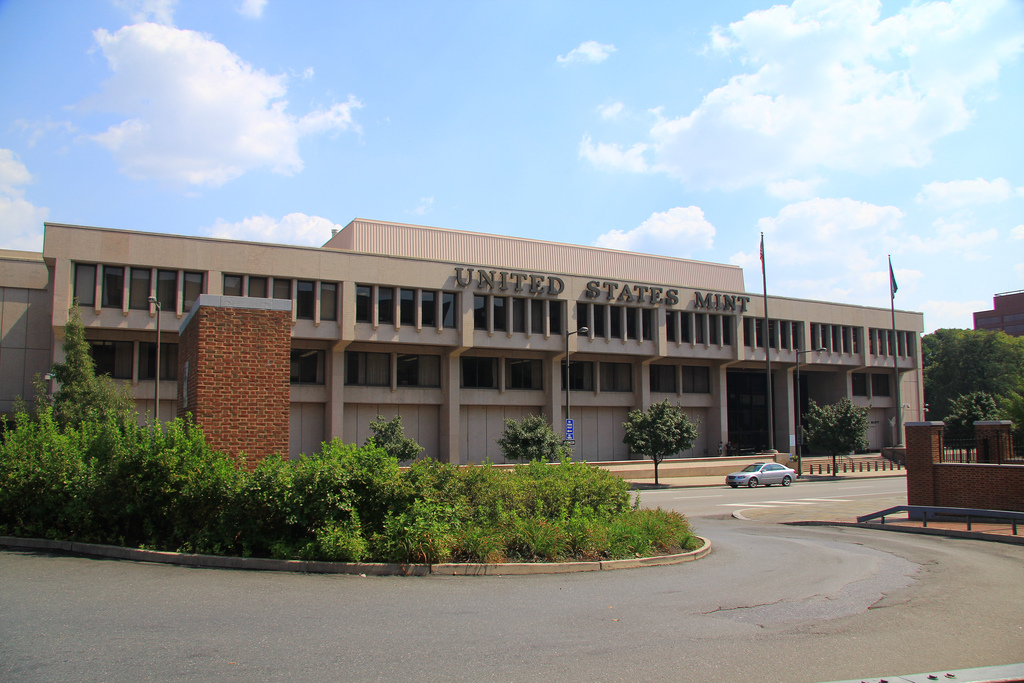 Yes, this is a live minting factory. The US’ first and only. The money you see from the suspended walkway will end up in people’s purses. There are employees actually making, shaping, dying, carving and cleaning coins through perspex (probably bullet proof) windows. It did feel a bit awkward at times, like it was safari and curious visitors had come to see the workers in their natural habitat. Along with money, the mint also do military awards and honours. I took no photos – I assume the reason is because photography was prohibited (or that everything was so grey and sombre). There are millions of dollars laying a few feet away after all!

After telling people that I had visited Philadelphia, the question I received countless times was “Did you have a Philly Cheesesteak Sandwich?” – this didn’t even occur to me as a ‘thing’ to do. When I replied no, there was such a look of derision on my interrogator’s face it would have been more comfortable to lie. I then heartily assured them that at some point in my future I will come across a piece of meat and cheese imprisoned by bread, of which may not share the same name, but will be equally as delicious. The clip above shows Will Smith in The Fresh Prince of Bel Air explaining what makes a good cheesesteak. 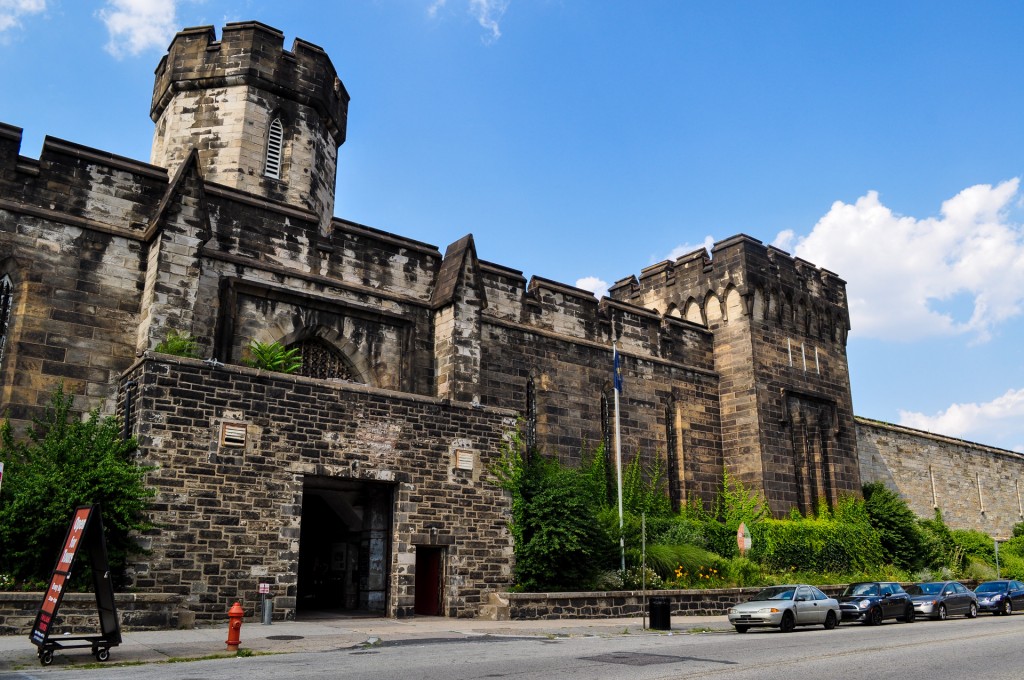 One of the highlights of Philly is the Eastern State Penitentiary. Pennsylvania Pen (or Penn Pen, as I like to say) was completed in 1829, in the gothic architectural style. Discarding traditional punishment and forced labour, this prison was the first glimpse of our modern day detention centres. Each prisoner had their own cell and rarely interacted with other inmates or guards. Isolation. Silence. Reflection. This government wanted prisoners to have nothing but their crimes to think about: the state pen was their place of penitence – hence the word, penitentiary. Al Capone and Willie Sutton are just two of thousands of men and women who spent time behind these walls.

Walking up to the prison doors there is an uncomfortable stillness.

As I purchased my entrance ticket I suddenly wanted to turn back.

The day I had decided to visit, there were hardly any other visitors around.

Standing in the shadows drawn by the walls, my skin grew goosebumps.

I enjoyed the experience of roaming around a closed prison, completely alone and isolated. I was told a story about how they had to remove a homeless woman and her 200 cats before they could turn the complex into a landmark. This story made me laugh – crazy cat ladies really do exist. 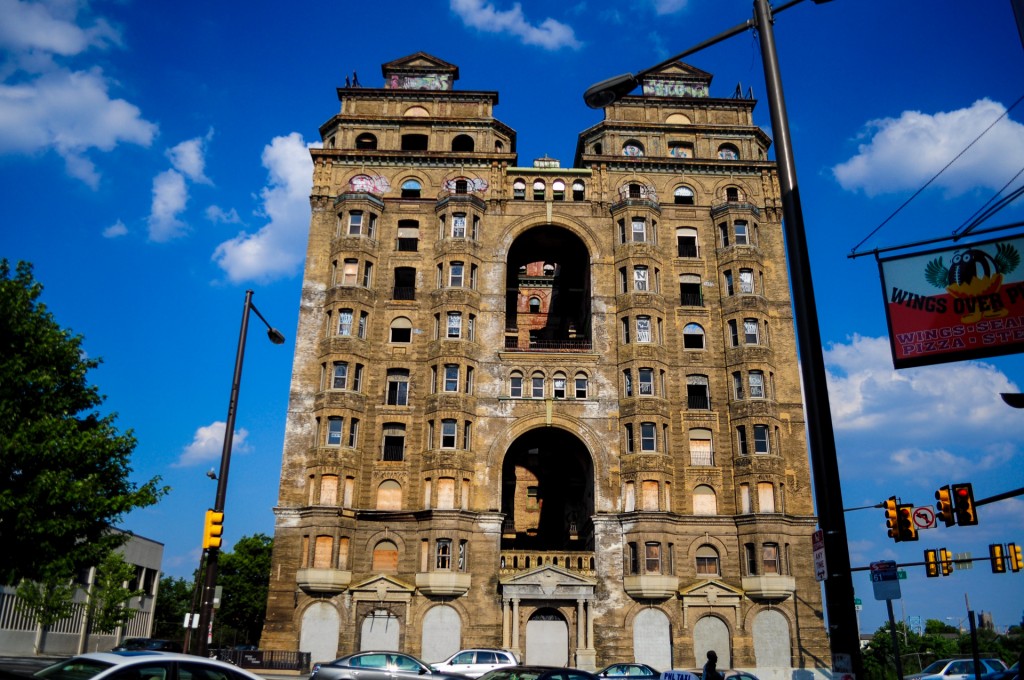 On my walk back I came across an abandoned building, and there are many in this part of town. I don’t know what caused me to stop but there was something that didn’t look right about its placement. Surrounded by the pizza shop, the afro hairdressers and the mini cab office, it clearly was from another time. As I continued staring, a local man approached me and said “Did you know this was a famous hotel? One of the most famous! All the stars came here – Marilyn Monroe…everyone!” This was the Divine Lorraine Hotel. I could just about imagine the plants draped over gilded windows and the residents talking to each other across beautiful balconies. I walked on – its former beauty was almost too sad to witness.

Philadelphia is full of relics. It’s the living past: and its story doesn’t end at the start of the union. I don’t want travellers to think this place is nothing more than a city full of horse-drawn carriages and actors in ill-fitting costumes. Unfortunately for me, I didn’t realise how much I enjoyed Philadelphia until I started writing this post. So when you’re there, don’t get distracted by the past – try and enjoy your present.

Penguin Prison: Breaking Out Onto The Scene
Tagged with: Backpacking, usa